Exotherms in a plant require more than ice to avoid disaster, says Chemjobber

You wouldn’t expect to need to pay much attention to a Suzuki reaction. With relative relaxation and joy at another day in the kilo lab, I helped a co-worker set up a Suzuki in a 72 litre flask. Sure, it was a little large, but certainly not a size that we found unusual. After the reagents (arylboronic acid, aryl bromide, base, palladium catalyst and diethyl ether as the solvent), we switched on the stirrer and turned to other things in the laboratory.

We had set up a probe to monitor the reaction temperature, and were a little surprised to watch it increase rapidly from the expected 15–19°C to 23°C. It was welcome news – a sign that there was a reaction happening and that the palladium catalyst was doing its job.

But the reaction did not cease its slow, steady climb. 23°C rose to 26°C, which increased to 30°C. We became chemists of action, rushing to cool the reaction as it approached the solvent’s boiling point. As we added buckets of ice and cold water to the tub surrounding the reaction flask, the temperature levelled out and finally dropped to something that no longer threatened to have us spending the afternoon cleaning up a reaction that had boiled over, spraying its contents throughout the fumehood. 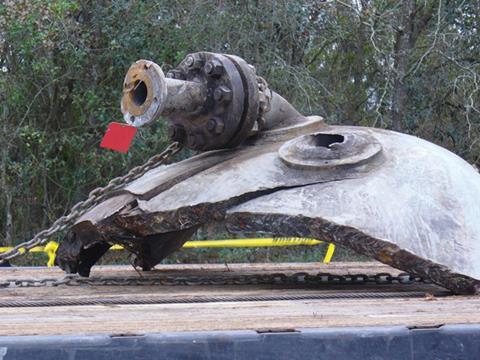 A runaway reaction at T2 Laboratories left four dead, 32 injured and bits of reactor strewn around the compound

We had experienced an exotherm – an unexpected one, but an exotherm just the same. Some reactions require heat to drive them, but many will produce their own – and the hotter they get, the faster the reaction goes and the more heat is produced. With some reactions, exotherms are expected. Most chemists approach quenching phosphorus oxychloride left over from chlorination reactions with trepidation. The oily reagent packs a powerful amount of heat as it releases its chlorines; it hydrolyses slowly in ice-cold water, but will rapidly self-heat and ‘run away’ from an inattentive chemist.

Grignards will exotherm as well, as the magnesium reacts with the alkyl bromide. This problem is solved by stirring the cooled magnesium and etheric solvent, while adding the alkyl halide in portions. After the reaction gets going, you can watch the temperature spike with each addition, then cool as the ice bath absorbs the evolved heat. The one time I walked away from the open spigot of the addition funnel and forgot the reaction, I was alerted by a warning ringing as the escaping vapours of boiling tetrahydrofuran set the glass adapter atop the flask shaking and rattling. I came running, and soon thereafter began the mad dash for the ice machine once again.

While both my stories of exotherms were prevented from becoming disastrous by timely addition of ice and water, this is a solution that doesn’t scale. Process chemists often say, ‘as volume goes up by the cube, surface area only goes up by the square’. This is an exceptionally opaque way to say that, as reactors get bigger, using jacket cooling to slow or stop a reaction doesn’t work nearly as well. It takes mere seconds to cool a 20ml vial, but many hours to cool an 8000 litre reactor.

Rather than relying on sudden cooling (or an ice bath the size of the North Sea), it is better to understand the reactions. Calorimeters will measure the heat released as a reaction proceeds and can test to see if a reaction will release even more heat if it exceeds typical temperature parameters. Differential scanning calorimetry can determine whether the final product itself is prone to decomposition and, if so, at what temperature. These tests (and many others) can avoid the potential disasters that can arrive with unplanned exotherms.

At plant scale, most reactors are designed to withstand remarkably high pressures and have vents to allow for escaping gases. These vents are usually covered with ‘rupture discs’ that announce reactor overpressures with a loud ‘pop’ as the escaping gases and solvents are directed somewhere other than at the plant operators.

I think each cohort of industrial chemists has a runaway industrial reaction that defines their generation. While I don’t speak for my peers, I know that the 2007 T2 Laboratories explosion in Jacksonville, US, is the one that I think about the most. There were many contributory causes, but a lack of understanding of a metallation reaction between methylcyclopentadiene dimer, metallic sodium and manganese chloride – combined with a malfunction in the reactor’s cooling jacket – resulted in an explosion that killed four people, injured 32 and devastated an entire industrial facility.

The US Chemical Safety Board report showed that further laboratory analysis of the reaction (which T2 had run on plant scale over 100 times) would have revealed a second exotherm that was only 22 degrees higher than the 177°C they typically heated the reaction to. The thoughts of lives lost and photographs of a destroyed industrial plant and mangled pieces of reactors are enough to give a process chemist the shakes – and to head back to the lab to make sure that something like that can never happen on their watch.