Chemical weapons concern us all

You don’t have to worry too much where people are hiding when dropping chemical weapons from a helicopter. The air currents are going to help you. And if your enemies are using basement shelters to escape the bombing, all the better; chlorine is much heavier than air, so it’s bound to reach them. 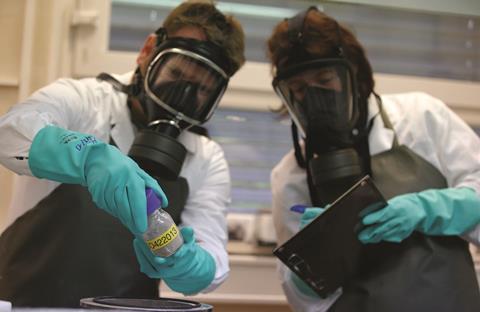 This may be part of the logic behind the use of chlorine as a chemical weapon in Syria. On 24 August 2016, a three-person investigatory team reported to UN secretary general Ban Ki Moon that it had found sufficient evidence to conclude that chlorine had been used on two occasions, in April 2014 and March 2015, by Bashar Al-Assad’s government forces in attacks on opposition areas. In the former attack the exact number of casualties remained uncertain; in the latter there were six fatalities. The team also concluded that Isis had used mustard gas on 21 August 2015 in an artillery attack, and that several shells had contained sulfur mustard.

Finding evidence to establish that chemical weapons have been used is difficult. Identifying the perpetrators is even tougher. So this latest report warrants careful reading because it confirms the use of chemical weapons and identifies those responsible.

As someone who has been involved in six investigations over the years of alleged chemical weapons use, I find the latest UN Security Council report to be measured in its claims. The team, a joint effort between the UN and the Organisation for the Prohibition of Chemical Weapons (OPCW), was led by Argentina’s Virginia Gamba, with two deputies – Adrian Neritani, from Albania, responsible for the political components, and Eberhard Schanze, from Germany, responsible for investigation.

Reliant on evidence obtained long after the events took place, the team investigated nine alleged incidents but felt the evidence was only good enough for three to meet its criterion of ‘sufficient’ (rather that the other categories of ‘overwhelming’ or ’substantial’). There was evidence that chlorine had been released in most of the other incidents, but that not all the details were consistent and certainly not good enough to attribute blame to any particular side.

Vitaly Churkin, Russia’s envoy to the UN, was quick to cast doubts on the report’s conclusions, claiming that evidence could have been fabricated by opposition forces and that undue reliance had been placed on who controlled the airspace to allow the chemical weapons to be dropped. Yet in contrast to Churkin’s claims, the team did not just rely on control of the airspace. The Syrian government provided no details about any flight logs for these two incidents, but the UN–OPCW team noted that there was no evidence that opposition forces were flying helicopters at the time. Refuting claims that the chemical attacks were caused by shelling, the team states that structural damage to buildings was consistent with bombs being dropped.

So if the Syrian government is to blame for attacks with chlorine, what can be done? In 2013, following an attack with the nerve agent sarin in a suburb of Damascus, the Syrian government joined the Chemical Weapons Convention (CWC). Although it denies it carried out the attack, the Syrian government, in contrast to other signatories to the convention, has been a reluctant participant in the drive to rid the world of chemical weapons. Syria has been cited by the OPCW on various occasions for not providing evidence to clarify issues.

The CWC has 192 signatories making it truly global in its reach – only Egypt, Israel, South Sudan and North Korea are not member states. And the treaty, which became international law in 1997, is quite explicit about what constitutes a chemical weapon: if the toxic properties of the chemical are used deliberately to injure or kill victims. Exceptions include riot control agents, such as CS and pepper spray, which are forbidden in war but permitted in normal policing. But chlorine, which has multiple uses – particularly as a disinfectant – is always classed as a chemical weapon when used to poison civilians.

Syria now appears to have violated a treaty it signed and governments will have to decide how to punish it.

But chemists should act, too. We must support the aims of the CWC and condemn the use of chemicals as weapons of war. We need to speak out through our professional bodies. And the chemical industries – particularly companies that produce chlorine – must reiterate that their products are to improve lives, not harm them. Finally, we should look to these companies to help introduce measures where auditing, or some other mechanism, shows that this aim is met.

As the last 30 years have shown, when chemical weapons are used it is civilians that are most at risk. The cost is too high for us not to act.