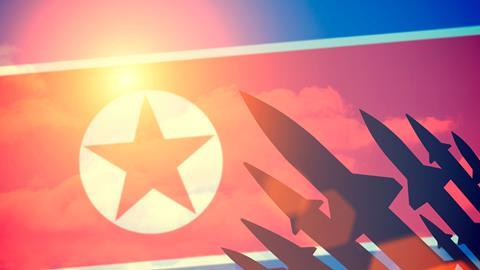 The Center for Nonproliferation Studies has identified at least one of the sites in North Korea suspected of producing the rocket fuel 1,1-dimethylhydrazine, also known as unsymmetrical dimethylhydrazine (UDMH) – the February 8 Vinalon Complex in Hungnam. The researchers at the Middlebury Institute of International Studies made the discovery by examining scientific work documenting the country’s production of the chemical, which is used in combination with an oxidiser such as nitrogen tetroxide. Dimethylhydrazine is known to be used by North Korea’s new generation of long-range ballistic missiles.

Dimethylhydrazine can be produced by several well-documented methods, including the Olin-Raschig process which was patented by German chemist Friedrich Raschig in 1906 and optimised for commercial production by the Olin Corporation in the US. North Korea produces the compound using a variation of this process with dimethylamine substituted for ammonia.

‘These three papers indicate that North Korea is producing UDMH, dealing with both the wastewater from production and assaying the content of a UDMH-water solution,’ the researchers concluded. ‘North Korea has a large chemical industry, much of which is concentrated in [and] around Hamhung and Hungnam.’ They noted that published accounts by North Korean defectors suggested that many chemicals for defence uses, which would include rocket propellants, are produced in this area.

Joshua Pollack, a senior research associate at the Center for Nonproliferation, tells Chemistry World that North Korea has an extensive chemical industry and R&D base, which extends to chemical weapons. ‘They are pretty capable in chemistry, we can certainly see this in their missile programme since they are producing lots of chemicals in that context,’ he says. ‘They appear to have demonstrated the use of VX earlier this year in quite a startling fashion in Malaysia,’ Pollack points out, referring to the use of the nerve agent to assassinate North Korean leader Kim Jong-un’s half-brother, Kim Jong-nam, in a Malaysian airport in February.

North Korea began producing chemical weapons in the 1980s and has an estimated stockpile of roughly 2250 to 4500 tonnes of chemical weapons such as VX, according to the South Korean defence ministry’s 2016 Defense White Paper. ‘Sources indicate that North Korea is capable of cultivating and producing various types of biological agents such as anthrax, smallpox and pest on its own,’ the white paper concludes.