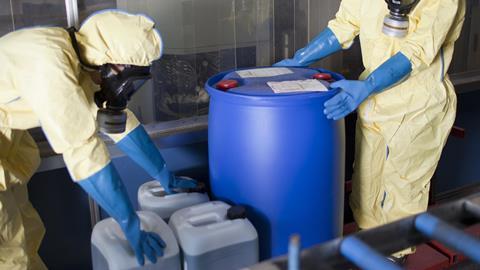 The return of chemical weapons?

Civilians in Syria were exposed to the nerve agent sarin in April, the Organisation for the Prohibition of Chemical Weapons (OPCW) confirmed at the end of June. This was the second documented use of sarin in Syria, and follows cases of chlorine and mustard gas being used as weapons. So can the world expect to see more chemical warfare?

‘There is a lot of concern within the OPCW,’ says Alastair Hay, professor of environmental toxicology at the University of Leeds, UK. ‘If the Chemical Weapons Convention (CWC) can’t be upheld, and perpetrators held accountable, then that is a problem.’

Syria crossed President Obama’s ‘red line’ in 2013 when it used chemical weapons in Ghouta, and, although the threatened US retaliation did not happen, the result was that Syria reluctantly joined the CWC. Hay doesn’t think that Syria will use chemical weapons again, because it will be wary of triggering further US missile attacks following those ordered by President Trump in response to the April attack. ‘The gains are marginal, while the outcry is huge,’ he says.

If the Chemical Weapons Convention can’t be upheld, and perpetrators held accountable, that is a problem

Tim Eaton, research fellow with the Middle East and North Africa Programme at Chatham House, agrees that Trump’s military response will make Syria hesitate before using chemical weapons again. ‘Now Trump has threatened heavy retaliation if they use sarin again. This is the first time that the Assad regime has been punished materially for human rights abuses in this conflict.’

However, security consultant Dan Kaszeta believes Syria will use chemical weapons again, eventually. ‘Trump is a roulette wheel, the least predictable leader on the world stage at the moment, and so he has no deterrent value.’

Weapons expert Richard Guthrie also worries that there are significant implications if no one is held to account for the use of sarin in Syria. ‘As it stands today, one lesson of Syria that could be drawn by other dictatorships is that a chemical weapons programme may buy you time within a civil war. If fear of being deposed, or getting caught and brought to trial, are the major disincentives to using chemical weapons, then the Syria case has illustrated neither of them.’

Another security threat, says Eaton, is the potential of ‘non-state actors’, such as terrorist organisations, to obtain chemical weapons technology, particularly in ungoverned or contested areas. ‘This is seen as a greater threat than a state using chemical weapons.’

Hay agrees that there are indications that some terrorist organisations are considering using chemical weapons, but so far there is only one instance verified by the OPCW which was ISIS using mustard gas.

While the threat of countries using chemical weapons has diminished, ‘chemical terrorism is no longer a theoretical proposition or even imminent threat, but a stark reality’, says OPCW Director General Ahmet Üzümcü. The OPCW describes various scenarios for chemical terrorism including non-state actors acquiring chemical weapons through the black market, illicit trade or theft; acquiring or producing chemical agents then deploying them with improvised devices; finding ways to disperse industrial chemicals, or contaminating the food chain, for example with ricin.

chemical terrorism is no longer a theoretical proposition or even imminent threat, but a stark reality

The organisation notes terrorists still need to overcome the challenges of producing chemical agents, which involves having the right expertise, equipment and facilities, and sufficient funds. The least scientifically demanding scenario involves the use of industrial toxic chemicals, such as chlorine, which is widely available on the commercial market in large quantities and is relatively easy to disperse.

Hay agrees that, in terms of making new weapons, such as nerve agents, there are several barriers. Turning them into weapons requires expertise that is not widely available outside the military. While chlorine is easier to obtain, non-state actors are limited by their lack of aircraft or weaponry with which to deliver it as a weapon. What’s more, it would be hard for them to get hold of sufficient quantities to have an effect. The OPCW has destroyed almost 95% of global stockpiles, and is working with the chemical industry to secure and police their stocks. Hay believes access to major stocks is now reasonably well controlled.

For Kaszeta, the main reasons that both states and non-state actors are unlikely to use chemical weapons in future are because they are impractical, unaffordable and ineffective. ‘To make one ton of nerve agent you need 9-10t of precursors – which OPCW control – and then you’re left with 8t of toxic waste. You need a testing and evaluation programme, and military-trained personnel … Chemical weapons are obsolete for a reason. The message should be: they just aren’t worth the bother.’

But Guthrie is not so positive. He highlights four key risks and threats around future chemical weapon use: governments outside of the CWC possessing weapons (Egypt, Israel, North Korea and South Sudan are all non-signatories); national controls on relevant materials and technologies varying between countries; ‘lack of capacity’ to attribute attacks to the perpetrators; and a complacency that international conventions will deal with problems.

But perhaps the greatest political challenge, he says, is maintaining political focus. ‘[Syria’s sarin attacks] brought a huge amount of political attention, but most of this has faded now.

‘The challenge of preventing the use of [chemical weapons] will go on for longer than the lifetime of individual governments.’