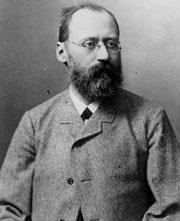 Western travellers to the East fuelled a fashion for Orientalism which reached its height in the 19th century. The Western public’s imagination was fired by painted visions of magnificent decaying monuments, of camels accompanying turbaned merchants, and of scantily clad odalisques draped invitingly across soft divans.

These fantasies were heightened by images of that exotic drug delivery system, thenargileh  or water pipe, which seemed to offer smokers a sweeter, gentler way to pass the hours. Could these have been inspired by the ancient Chinese mercury stills in which the outlet was bubbled through cold water to condense the metal?

To a chemist such a bubbler system is oddly familiar. From the mid 18th century, European chemists had begun systematically to investigate the properties of gases. At first gases were generated, bubbled through water, and collected in an upturned container; water-soluble gases were collected by displacement of mercury. As researchers became familiar with gases, they sought more efficient ways to generate and purify them.

A key advance was the Woulfe bottle, developed by the eccentric Irish-born Fellow of the Royal Society and part-time alchemist Peter Woulfe (1727-1805) who had discovered picric acid in 1771. Consisting, essentially, of a jam jar with two necks, a chemist could run a reagent in through one opening and collect a gaseous product from the other. The bottle could also be used as a bubbler to scrub or purify injected gas. But leaks were an ever-present problem. Corks had to be sealed somehow (’luted’), a tedious and messy business in the days before the now ubiquitous silicone. In their textbook of 1858, Abel and Bloxham explained that ’the most convenient [lutings] are almond paste, linseed meal (or mixtures of both), white lead, and plaster of Paris.’ 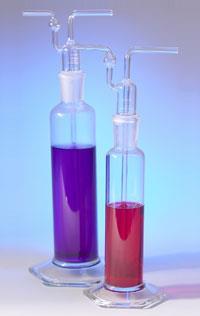 Heinrich Ferdinand Edmund Drechsel invented a device that eclipsed Woulfe’s bottle. Born in Leipzig in 1843, Drechsel studied chemistry there, becoming assistant to Kolbe. After time spent first with Volhard, with Scheerer, and then working for a smelting works in Belgium, Drechsel joined Carl Ludwig’s Institute of Physiology in Leipzig in 1872, where he found his true calling in biological chemistry. It was here that he discovered the amino acid lysine and proved that proteins were the ultimate source of the urea found in the urine. He made significant contributions to the chemistry of carbamates, cyanamides and melamines. At the same time he carried out some of the earliest electrochemical syntheses of organic compounds using alternating currents, and isolated platinum compounds resulting from the corrosion of his electrodes. Similar experiments a century later, but in the presence of live cells, would lead to the discovery of cisplatin.

In the course of his work, in 1875, Drechsel invented the device for which he is remembered - a gas jar topped with a single ground glass joint into which fits a stopper that combines a long gas inlet tube, reaching to the bottom of the device, and an outlet. Even highly corrosive gases could be scrubbed of impurities, because the ground glass joint took care of leaks. Used in reverse the bottle prevented dangerous suckbacks.

Pressures on academics were different back then and it probably never occurred to Drechsel to patent his device. Within a few years ’wash bottles according to Drechsel’ were on sale from most glassware suppliers. For example, in 1887, James Queen and Co. in Philadelphia were selling them in four different sizes for around a dollar a pop.

But for Drechsel this was irrelevant. In 1878 he was promoted Extraordinary Professor and was elected to the prestigious Leopoldina (which would eventually become the German Academy of Sciences) in 1888. Four years later, Drechsel was appointed Professor of Physiology and Pathology at Berne. By then he had taken on biochemistry full time and published seminal papers on halogenated amino acids in tunicates which are still cited today. He died young, of a heart attack at age 54, while working on soft corals in Naples in 1897, leaving two young sons. Several learned societies banded together to collect a trust fund for the orphans’ education.

His flask, often mispronounced and mis-spelled as ’Dreschel’, is still selling well and is often seen scrubbing noxious volatiles from flow systems. Unlike with the nargileh, just follow Bill Clinton’s precedent and don’t inhale.