Beer has made an immense contribution to humanity generally and to chemists in particular. How many brilliant experiments have been devised, sketched out, and even interpreted in advance with the assistance of a few glasses of the golden liquid?

As chemists, we owe a huge debt to those pioneers of fermentation chemistry who first demonstrated an analytical approach to beer-tasting. From the Mongolians, the Greeks, the Chinese, the Zapotecs, and the Arabs, who all contributed to the discovery of that delightful distillate, aqua ardens  (the water that burns), we can trace an extraordinary variety of still designs. 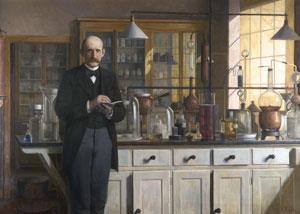 Danish chemist, 1849-1900. Head of the Carlsberg Laboratory, Copenhagen (1876-1900). Developed method for determining the nitrogen content of organic compounds, and invented the Kjeldahl flask.

A more modern piece of glassware with roots in the brewing industry is the Kjeldahl flask, round-bottomed and long-necked to trap splashes from material being boiled for analysis. It was devised by Johan Gustav Kjeldahl to solve a beer-related problem. In the 1870s, the Carlsberg brewery in Denmark was owned and run very successfully by J C Jacobsen, a man of great culture and acumen who wanted the latest science to inform and guide his business. Inspired in part by the work of Louis Pasteur in Paris, he set up a foundation, at the heart of which would be a laboratory devoted to basic research. Needing a chemist, he hired the young Kjeldahl.

Born in 1849 in Jaegerspris, Copenhagen, Kjeldahl had studied at Copenhagen’s Royal Polytechnic before becoming an assistant to Jacobsen’s friend C T Barfoed, at the Royal Agricultural College, in 1873. In his new post, Kjeldahl soon became interested in the protein content of grains used in the brewing industry - measurements which in essence meant finding out how much nitrogen his samples contained. 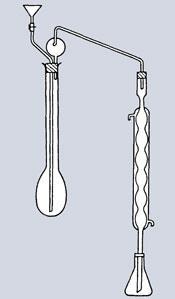 In the mid-19th century if you wanted to determine the C:H:N ratio of an organic compound, then combustion analysis was the only game in town. Gay-Lussac and Liebig had perfected this art to determine carbon and hydrogen content, by measuring the carbon dioxide and water produced when a compound was burned with copper oxide.

Nitrogen, however, was a trickier customer - incomplete combustion gave nitrogen oxides, and contamination by air was always a worry. Liebig’s great analytical rival Dumas purged his entire apparatus with carbon dioxide before combusting the sample, and collected bubbles of nitrogen over mercury. The method was tricky and laborious.

Instead of collecting nitrogen gas, later analytical chemists preferred to determine nitrogen content by converting it quantitatively to ammonia. In 1841 two of Liebig’s students, Will and Varrentrapp, developed a method where the organic compound was pyrolysed directly with alkali, liberating ammonia which was turned into ammonium ions, precipitated as a salt, and weighed.

By the time Kjeldahl started work on proteins in barley, this method was still going strong, but was completely unsuited to his project which required many analyses in series. Kjeldahl needed a method that avoided combustion altogether. Digesting his samples in concentrated sulfuric acid in the presence of permanganate, he found he could generate ammonium ions quantitatively. The solution was then diluted and transferred to a simple distillation apparatus which included the long-necked flask that came to bear his name. Adding alkali liberated the ammonia, which was distilled directly from a condenser into standard acid. A number of additives and catalysts improved the process, which is mostly automated nowadays.

Kjeldahl included his method in the Carlsberg annual report for 1882-83 and presented it to the Danish Chemical Foundation in March 1883. William Crookes reported it enthusiastically in his Chemical News  in August and the method caught on rapidly. In the Journal of Analytical Chemistry  the analyst L F Kebler commented that ’no method has been so universally adopted, in so short a time, as the method of Kjeldahl’.

Kjeldahl himself went on working in his lab perfecting other techniques and overseeing the design of a new laboratory. He never married, and died of a brain haemorrhage while swimming in the sea in 1900.

That he was succeeded at the Carlsberg laboratory by S P L S?rensen, who invented the pH scale, makes one wonder where humanity might be if more breweries took such an enlightened view of their profits. By the 1960s, with the advent of gas chromatography, the Dumas combustion method for collecting nitrogen gas came back with a vengeance. But Carlsberg could proudly say that for almost a century Kjeldahl’s had been the best analytical method in the world. Probably.