When I was about 16, I came across a peculiar novel in my father's study

When I was about 16, I came across a peculiar novel in my father’s study. Written in 1884, Edwin Abbott’s Flatland  described the strange adventures of a character called A Square, who lived in an Euclidean world - Flatland - populated by characters of a variety of geometric shapes. 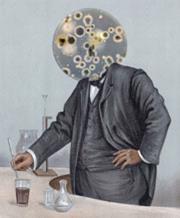 In the story, A Square encounters a mysterious being from another world who describes himself as a ’Sphere’ and proceeds to show our hero a series of magic tricks - appearing, inflating, then deflating at will before disappearing again - all by cutting across the plane of Flatland.

Most chemists, however, live in a three-dimensional world. Ever since Jacobus van’t Hoff and Joseph Le Bel proposed their revolutionary idea that Archibald Couper’s four-connected carbon must be tetrahedral, we have been forced to think about our subject in the round, devising ever more sophisticated ways of visualising complex molecules. Our apparatus, too, reflects this - we use tripods, cylinders, spheres and hemispheres, cones, helices and spirals. Perhaps it is therefore appropriate that the one piece of glassware commonly found in the lab that is resolutely 2D, the Petri dish, came from microbiology rather than chemistry.

Richard Julius Petri was born in the town of Barmen, Germany in 1852. He did his basic medical training at the Kaiser Wilhelm Academy from 1871 to 1875 and then moved to the Berlin Charit? hospital for his practical training before practising as a military doctor until 1882. During this time he was seconded to the Imperial Health Authority’s research establishment in Berlin to work with Germany’s leading microbiologist, Robert Koch.

Koch was a remarkable scientist. A bored country GP, he became obsessed with anthrax during a local outbreak. In his spare time over several years, Koch proved that it was caused by a microorganism. His experiments gave him a profound understanding of the disease and revolutionary methods of handling the pathogen. A modest man who worked alone, he refrained from publishing his results until invited to speak at the University of Breslau. There he gave a series of astonishing demonstration lectures, repeating all his key experiments. He soon had a job in Berlin where he could do research without the distraction of patients. 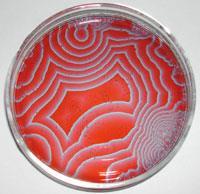 The Belousov-Zhabotinskii reaction seen in a Petri dish

Crucial to Koch’s work were his methods for culturing microorganisms. He began to use broth stiffened with gelatine or agar to grow and immobilise his organisms. Koch would pour small quantities of the hot broth onto microscope slides or into wine glasses, which he protected with bell jars to avoid contamination. When Petri joined the group to work on tuberculosis, he came up with the idea of using a low-walled crystallising dish, sealed by placing another of slightly larger radius over the top. Previously invisible colonies could now be watched as they grew.

But was it really Petri’s idea? There has long been controversy about this. Petri only published his design, unillustrated, in 1887 and some have argued that credit should go to two microbiologists in Romania, Andre Cornil and Victor Babes, who published a bacteriology textbook in 1885 that described a similar dish for bacterial growth (shown in the central figure on this page). However, the 3rd edition of a textbook written by Emanuel Klein (Micro-organisms and disease  ) in the same year describes the dish, but refers to it as Koch’s plate method. My feeling is that it had been in use for some time before Petri published it and was so effective that it had spread rapidly across Europe. Once Petri’s paper appeared, scientific suppliers started naming it after him and the name stuck.

But by the time of the publication, Petri had already moved on, first as director of a tuberculosis sanatorium in G?bersdorf, then as director of the Museum of Hygiene in Berlin, before returning to Koch’s institute as one of its directors in 1886. Petri continued research throughout this time, ultimately publishing 150 papers, books and, among other things, developing the method of cloning bacteria by transferring small subsets of bacterial culture grown on one gel to another.

He retired in 1900 and was reported to have become both stout and vain, taking any opportunity to dress in the uniform of a senior army doctor, the sash girding his belly like the equator.

There are Petri dishes in labs everywhere, where their low dimensionality helps to make visible the most complex of phenomena, from bacterial growth to the beautiful wave patterns of the oscillating Belousov-Zhabotinskii reaction. But as with the conical Erlenmeyer flask, the Petri dish has become more than just glassware. It has become a metaphor for any small experiment nurtured with care.

Andrea Sella is a lecturer in inorganic chemistry at University College London, UK.