Sooner or later, it is the fate of every scholar to be accused of pedantry 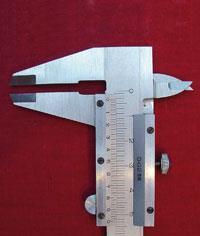 Sooner or later, it is the fate of every scholar to be accused of pedantry, and if there are two words guaranteed to light up the P-word brightly in the mind of a student they are ’precision’ and ’accuracy’. To some the difference seems academic, but there are times when such issues make the difference between profit and loss, success and failure, even life or death.

One place where such questions really mattered was in navigation. As intrepid adventurers backed by venture capitalists began to press further and further from the coasts of Europe in the 15th century - with unreliable crews and even less reliable maps - the problem of knowing where you were became ever more pressing.

A magnetic compass could be used to establish the cardinal points. Speed could be reckoned by dropping something off the side of the ship and measuring its passage with a knotted line. And then there was latitude, which required knowledge of the position of the sun and the stars, whose declinations were listed in extensive tables.

However, measuring their position was no easy business. One method was to use a mariner’s astrolabe - a heavy metal disk or ring, the edge inscribed with the angles of the circle, which could be hung so as to sit vertically. A pointer - the alidade - sitting in the centre, could be rotated. By careful sighting it was possible to read off the angle of a star to the horizon. On land, measurements were tricky enough. The difficulties of making such sightings on the deck of a bucking ship are hard to imagine. 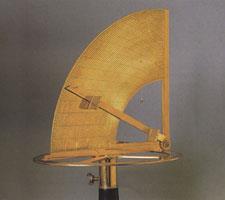 A navigational quadrant in the style of Pedro Nu?ez. The scale required intricate engraving, which Vernier’s modification greatly simplified

Of the many cunning refinements, one stands out. Pedro Nu?ez (Peter Nonius), cosmographer Royal to King John the Pious of Portugal, developed an ingenious new device that he published in a volume called De crepusculis
(Of sunsets) in Lisbon in 1542. It comprised a vertical plate in the shape of a quadrant of a circle, turning on a flat, calibrated base. On the quadrant, rather than having a single scale inscribed in degrees, Nu?ez engraved a series
of concentric arcs, each with one graduation fewer than the one before. So while the outer arc had 90 markings, the inner arcs were inscribed with 89, 88, 87 and so on. When the alidade was aligned with a star, one could read the number of degrees, and then noted the coincidence with a marking on an inner arc - a set of tables then provided the conversion into minutes. But the device was a pig to engrave correctly, and only the Danish astronomer Tycho Brahe is thought to have used the system in its original form.

In 1631, Pierre Vernier, a military engineer born and bred in the pretty town of Ornans, not far from Besan?on in France, came up with an ingenious solution. It did not come out of the blue - as a boy Vernier almost certainly helped his father with surveying jobs. As his reputation as an engineer grew he would have made many such measurements.

Vernier divided the quadrant into half degree marks, and then attached to the pointer a moveable scale 31 degrees wide, divided evenly into 30 markings. When a measurement was made the position of the zero point gave the rough angle, and the coincidence of the marks on two scales provided the additional minutes of arc. It was robust and fast.

A Vernier scale used to read a measurement of 10.1mm

Soon modified to make decimal readings, the moveable scale would spread from astronomical instruments to almost every other measuring device - from callipers to barometers and spectroscopes. There isn’t a scientist or engineer over the age of 30 who hasn’t used one.

However, the invention did not change Vernier’s life. He continued to work as a military engineer and eventually became captain of the Castle of Ornans - a position he held until his death. And he would have remained obscure - the scale was called a ’Nonius’ until Vernier’s name was rescued by J?r?me de Lalande in his textbook on astronomy, published in 1764.

Today the Vernier scale is fading. Everything around us has a digital readout. And any lingering doubts one might have about the quality of a measurement are quashed by a row of inscrutable digits staring out from a plastic box. But it wasthe Vernier that gave the precision everyone craved. Accuracy? Well, that’s another question entirely.