Rise of the machines

Synthetic chemists are a creative bunch, and we often see our science as akin to an art form. Who can argue against classic syntheses sharing the kind of inspirational insight and elegance often attributed to great artists? Not me.

Unfortunately, considering ourselves artists bears some risk of reinforcing the belief that we are unique in our ability. The potential value of chemical synthesis should compel us to make it more accessible. With the oncoming march of artificial intelligence, I am comfortable with the idea that synthetic planning in applied sciences such as drug discovery will eventually be heavily digitised, and the skills of a medicinal chemist will evolve accordingly. On the other hand, when it comes to performing practical chemistry, there is also an artisanal element we need to forego. We all know someone with magic hands, who always gets perfect selectivity when everyone else is floundering in the 70% range. Unfortunately, these discrepancies limit the broader application of synthesis, only highlighting that we haven’t nailed down our science well enough.

Fortunately, the mood is changing, with progress towards ‘democratising’ chemical synthesis (if not research!) through automation. One example is the ‘Chemputer’ built by Lee Cronin’s team at the University of Glasgow, UK. Another is the capsule-based synthesis unit created by Jeffrey Bode, Benedikt Wanner and their team at the Swiss Federal Institute of Technology (ETH) in Zürich.1 It resembles a modern coffee machine: fill it with reactant and solvent, pop in your reagent capsule of choice, press go and wait for the purified compound. The chemistry included is not new, and is a bitter pill for medicinal chemists: Bode’s SnAP (tin amine protocol) reagents2 are excellent at providing access to substituted saturated heterocycles (figure 1), but the alkyltin radical precursors are a real red flag. In part safety plays a role, but the real devil is the difficulty of removing the tin waste and the havoc it can play in assays. 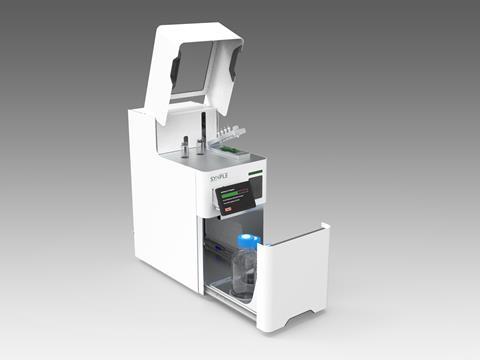 The self-cleaning and fully encased reactor is operated by a touchscreen. The operator need only add the starting aldehyde and solvents and then the reaction capsule composed of four cartridges. The cartridges contain an iminophosphorane derivative of the SnAP reagent, the Cu(OTf)2 and 2,6-lutidinium triflate catalysts separated by a frit, along with ion exchange and silica gel purification cartridges. The experimental operating instructions for the machine are programmed using a radiofrequency identification (RFID) chip on the capsule, to minimise setup errors.

After pressing go, the machine runs automatically. First the imine is formed by circulating the aldehyde through the SnAP cartridge. Cyclisation follows by running the solution through the catalyst cartridge. The products are filtered through silica and purified by ion exchange to give products at typically greater than 90% purity and, according to the paper, with <5% tin in the final product.Unfortunately that is way more tin than I want in a pharmaceutical material.

While trained chemists may get better yields, the machine opens the chemistry to non-expert users

While this specific benchtop reactor is not likely to revolutionise synthesis on its own, it is an important demonstration that chemistry can be automated in a standardised plug-and-play apparatus. The enclosed machine and sealed cartridges have major safety benefits, as does removing the need for work-up and purification – arguably the most complex aspect of synthetic chemistry. With RFID chips removing setup errors, this system can genuinely enable non-experts to use synthesis effectively. While synthesis is important in its own right, its real value is in enabling science more broadly. Automation and artificial intelligence are raising the impact of humans’ work to the next level.

The limited versatility of the machine so far (two reactions) restricts its impact in more traditional synthesis labs, but we should not ignore it. Standardising our processes where we can is important in ensuring efficiency, and automating these processes has additional benefits regarding safety and high quality data generation. The retrospective failure of automated synthesis at the peak of its hype in the 1990s and early 2000s was a major setback, and makes conservative chemists wary of returning to a failed approach, even though lessons were learned and technologies have been superseded. We also have nothing to fear from automation – the value of a chemist is not in the weighing, mixing and shaking, but in the thinking. And we all know that no robot is going to get a molecule out of a foamy aqueous sludge any time soon. I for one welcome the rise of the machines!