Scientists in the UK have developed an organic chemistry automation system and programming languages that they hope will make it easier and simpler for people to reproduce complex reactions. The Chemputer from Lee Cronin’s team at the University of Glasgow has demonstrated these capabilities by autonomously making three drugs, including Viagra and Nytol.

I’ve developed an ontology for organic synthesis. That sets it apart from anything ever imagined

Externally, the Chemputer looks like a hybrid of existing liquid handling robotics, with syringe pumps and valves, and conventional chemical laboratory glassware. However, Cronin stresses the importance of the programming ‘ontology’ instructing it. ‘The fact that it is a programmable universal system and I’ve developed what is an ontology for organic synthesis sets it apart from anything ever imagined,’ Cronin tells Chemistry World. 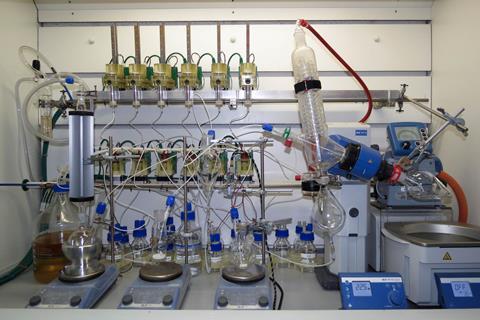 While the Chemputer looks like existing chemical systems, the computer environment underlying it is novel in that it strives to be universal

That ontology breaks organic synthesis into four common steps: reaction, workup, separation and purification. ‘In general, synthetic chemistry has no other steps associated with it,’ Cronin explains. ‘That abstraction allowed us to understand that we could make a programming language that would work for all chemists instantly, because it embraces the round bottom flask.’

A Chempiler program incorporates a map of the Chemputer, sending instructions to its different modules. While the layout can be described in an existing language, GraphML, Cronin’s team had to develop a specific language to encode chemical procedures, which they call Chemical Assembly (ChASM). 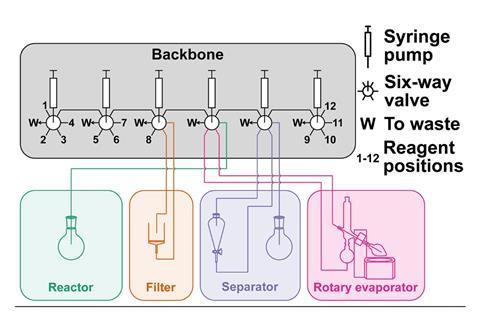 Chemists can write their instructions in chemical descriptive language (XDL), also developed by the Glasgow team, and convert it to ChASM. Sending ChASM commands such as ‘start stirring the reactor’ to the Chempiler then triggers the resulting action in the Chemputer. This ontology enables the Chemputer to be universal, encompassing different system ‘fingerprints’ with varying module shapes, sizes and types.

Making the system work seamlessly also involved several ingenious details. To automatically identify interfaces between different solvent phases during separation Cronin’s team exploited conductivity measurements. The Chemputer includes a tube to transfer mixtures into and out of a rotary evaporator module, which removes solvents. However, this led to material getting caught in the tube. The Glasgow scientists therefore attached a magnetic stirrer bead to the tube to move it out of the way.

Demonstrating the Chemputer, Cronin’s team made Nytol (diphenhydramine hydrochloride) over four steps without human intervention, yielding 58% of the theoretical maximum amount possible in 77 hours. They also synthesised the anticonvulsant drug rufinamide at 46% isolated yield in three steps over 38 hours. That compares to 38% yield for manual synthesis. Similarly, the Chemputer made Viagra (sildenafil) in four steps over 102 hours in 44% isolated yield.

The Chemputer’s synthetic route to Nytol

Cronin’s team is already working on making the Chemputer easier to use. On the Chemify website they intend to share Chemputer scripts, and simplify XDL programming using natural language processing. ‘It will take your synthesis and when you press the “transform” button, it converts it into chemical code,’ Cronin explains.

‘By offering their blueprints and code to the scientific community, the Cronin lab continue to fulfil their ongoing mission of democratising synthesis and, quite literally, suggest a recipe for improving reproducibility,’ says Anat Milo from Ben-Gurion University of the Negev, Israel. ‘I’m excited to see the implementation of this technology and whether different labs would put their personalised twist on it.’

Anna Slater from the University of Liverpool observes that automated systems are often inflexible, which creates a high barrier to entry. ‘The Cronin group’s use of round-bottomed flasks and reconfigurable pathways lowers this barrier considerably,’ she says. ‘I’d certainly like to try to make one.’ But, she finds the potential of the programming language most interesting. ‘I would be very excited about a future where it’s commonplace to publish, in an unambiguous format, all the reactions – successful and unsuccessful – relevant to a publication.’

This is very much part of Cronin’s vision of using Chemputers to make life easier for chemists, rather than threaten them. ‘It is not replacing the bench chemistry discovery, it’s making it reproducible, forever,’ he stresses. He therefore now wants feedback. ‘What are the 100 top molecules that are really annoying to make in the lab, that people would like to make Chemputer code for?’ he asks. ‘We’ll get a bunch of people to work together collaboratively to make the Chemputer code for those molecules and validate them. The Chemputer even has a Twitter account that will publish updates, receive requests for molecules to make and so on.’