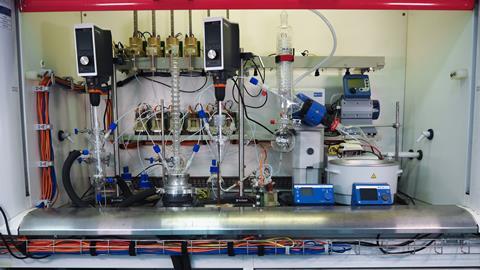 What should the chemputer synthesise?

Digitising organic synthesis could revolutionise life in the lab

When I enter the average synthetic chemistry laboratory I’m often struck by the familiarity of the setting, regardless of where I am in the world. There are benches, fume hoods, evaporators and large amounts of glassware. All this kit is used in chemical synthesis – an art form that has largely remained unchanged for hundreds of years. Day in, day out, the average synthetic chemist is tied to the fume hood as they carry out tricky but repetitive solid and liquid-handling operations. But what if it was possible to digitise the ability to make complex chemical compounds on demand?

Around eight years ago, I asked myself and my team whether it was possible to make complex chemical compounds automatically. Could we instruct a universal chemical robot to produce any molecule I wanted from a computer code, just as effectively as an expert chemist, at low cost? The concept of the ‘chemputer’ was born.1

Automation in chemical synthesis is not new – it has had an impact in both polypeptide synthesis and oligionucleotide chemistry. Today, recent advances in areas such as flow chemistry, oligiosaccharide synthesis and iterative cross-coupling are expanding the number of compounds synthesised by automated methods. Yet so far automation has not delivered the same returns when it comes to combinatorial synthesis, as the molecules produced are generally limited in complexity and come from a relatively small palette of standardised reactions.

To challenge this limitation, I reasoned that a programming language should be developed for chemical synthesis. But how should it be run, and what hardware would be needed? It was then I realised that the approach should mirror how a bench chemist works. The best way was to build the system around the round-bottom flask, doing serial reactions in batch. This would mean that the 200 years of historical reactions could be accessible, and the 200,000 bench chemists active in the world today could recognise the approach and instantly use the system.

Our aim was to use a relatively small range of modular equipment to accomplish a wide variety of different syntheses. This required us to develop a high-level abstraction that encompasses the four key units of any chemical synthesis: reaction, work-up, isolation and purification. By understanding how these processes could be linked together, my team and I reasoned that a standardised format for reporting a chemical synthesis procedure, coupled with set of rules linking the synthesis to physical operations of an automated robotic platform, would yield a universal approach to a chemical programming language – the chemputer.2

We are establishing the chemputer as an open standard (see www.chemify.org) and encouraging and aiding as many people as possible to build one; the plans are freely available for non-profit use at present, and a commercial version will be available in time. The key benefits are time, cost, access and safety. Right now, the average synthetic chemist spends a vast amount of their laboratory time doing known reactions, aiming at known molecules – unknown reactions and molecules are typically the last steps in a lengthy chain. If this process could be automated, then much longer synthesis protocols would be accessible, with obvious benefits for drug discovery, the development of new molecular technologies and so on.

As more teams build the chemputer, more codes will be available and more ‘on demand’ compounds will be made. This means that we can expand our database of chemicals that can be made in the chemputer with only minimal human intervention. Chemists will also be able to reproduce each other’s work on demand much more quickly, encouraging collaboration rather than secrecy. New reactions, reactivity, and compounds could be validated practically in chemputers before publication, and new reactions, reagents and interesting molecules could be shared using a chemical version of Spotify, possibly in a pay-per-synthesis model. Given that chemists would no longer have to spend time doing old reactions, they could focus on new areas. Perhaps chemistry will even witness its own version of Moore’s law, with the regular doubling of the number of new digitally accessible molecules known.

A new way of distributing the code for any synthesis is now possible through our new chemical mark-up language, XDL. We have also developed software that can turn a standard synthesis text into a mark-up language that is uniform and playable in the chemputer. As part of this project, we are encouraging synthetic chemists to think about recording their manual syntheses in a clear way, so that they can easily be converted and stored in this language, which could then be converted to computer code for the chemputer or translated back to a human-readable text.

For the chemputer to succeed, we need your help. We are currently compiling a list of the top 100 synthesis codes to make it worthwhile for every synthetic chemist to have a chemputer, so please tell us the top molecules you would want an automated system to make. And for those brave pioneers willing to take part in the chemputer’s development, please get in touch so we can give you access to our small but expanding database of chemical codes and hardware developments. Currently, less than a dozen molecules have a digital code for production, but with the outlay of a modestly sized chemputer costing less than £23,000, we hope this number will expand rapidly.