The silent rise of the robots

Mechanical helpers have been creeping into our labs for decades

You can find a lot of pictures of people in old chemistry labs, and I’ve sometimes tried to imagine what it was like to work in one of them. But I know that I’m not creating an accurate mental picture, because the more I think about things, the more I have to refine the one that I already have. Depending on the age of the photograph, you may well be looking at people who had to blow a fair amount of their own glassware, who had to distill all their own solvents, and who most definitely had to make many of their reagents themselves. Modern synthetic chemists do some of those things occasionally, but it’s safe to say that it’s become more and more rare. 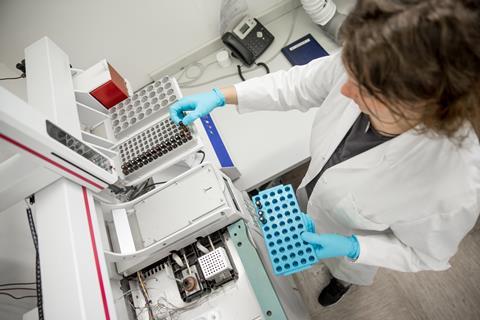 Go back far enough, and the problem isn’t so much that there weren’t as many things in the chemical supply catalogues; it’s more that those catalogues didn’t exist. A chemist from that era, seeing how things are done now, might well feel a mixture of envy and irritation. These modern types have it so easy! And in a way, we do. But from another perspective, we’ve just found ways to spend more of our time up at the coal face, and less time and effort getting there. Some of that comes, of course, through the aid of machines, which is another change our chemist friend from a century ago might have found simultaneously fascinating and alarming.

We’re not so stunned, though, because all of this has been sneaking up on us for years. When I started in industrial drug discovery, our NMR machines had no autosamplers, for example. There was a signup sheet, and when your name came up, the person before you finished up their spectra and called you on the lab phone, to tell you to come down with your sample(s). Run a series of samples overnight? Only if you sat there overnight and ran them. That was already becoming a bit archaic, but (to pick another example) I spent a lot of time in graduate school and early in my industrial career packing my own chromatography columns and cutting my own solvent fractions as they ran. And while that seems archaic to those of us who’ve had access to cartridge columns and fraction collectors for years, it still can be the daily reality for many others.

I got used to not doing it that way, though. Just as I got used to autosampler queues for liquid chromatograph–mass spectrometers (and, come to think of it, as I got used to simply having such instruments available in the first place!) I don’t even think of these things as machines helping me out, as the robots that they actually are. But that 1919 chemist would certainly notice, although it would still be a year or two before the word ‘robot’ even entered the world. Even the rotary evaporator, a standard piece of equipment in any organic chemistry lab, would have seemed like an extraordinary labour-saving device, a tireless mechanical servant removing the drudgery of having to evaporate your own solvents!

And it might be that very moment that it became plain just how much drudgery it was, once the alternative came into view. Many of us have either forgotten or never knew these things in the first place, and they’re why I really can’t come up with an accurate picture of what a 1919 chemistry lab would really feel like. I feel sure, for example, that I haven’t been imagining spending my time carving down rubber stoppers to fit hand-blown flasks, or slowly distilling away solvent on a steam bath (because it was too precious to treat as waste). What would my day really have looked like?

And what will a chemist’s day look like a few decades from now? We’re already having mechanical tasks taken from us. Most of us applaud that, before we take it for granted. But what about when the machines, the hardware and the software alike, start coming for functions that we’ve assumed are more surely the prerogative of not only human hands, but human minds? No doubt we’ll get used to that as well. Then take it for granted. And go around with completely wrong-headed ideas about how those folks spent their time, way back in 2019.