After hearing that I work in the drug industry, people respond in several different ways. Most of these bear on personal issues: ’Hurry up and invent something for [fill in appropriate disease, and there are plenty]’, or ’How come my drugs cost so much?’ are two perennials. My answers to those, in case you’re wondering are, respectively: ’I’ll try, but after twenty years I’ve hardly invented any drugs at all’, and ’It’s my fault, I’ve been doing this twenty years, and I’ve hardly invented any drugs at all’.

But there’s another occasional reaction that has set me thinking. Once in a while, I’ll hear something like ’Oh, well then you must not worry much when you get a prescription’. The assumption is that I would know how the medication is working, so I would have no doubts about its efficacy or any side effects. I haven’t handled this one well in the past, and the reason is that this assumption is almost completely wrong. I try not to take any medication unless I feel it’s absolutely needed, and I’m often not very happy about taking it even then. Not much of an advertisement for the drug industry, am I? 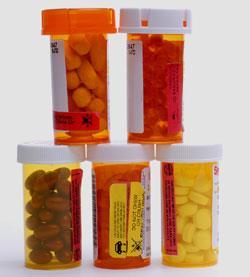 Explaining why this should be is hard. The first difficulty is with the mechanism of action of specific drugs, which is complicated by the number of marketed drugs for which no good mechanism is agreed (or when one was found only after they came to market). One might wonder if this still happens in the modern era, but while this category has diminished, it has by no means disappeared.

There’s an even longer list of drugs that have a putative mode of action, but for which this description is at least partly useless. Most of the central nervous system agents fall into this category. How could they not? Our ignorance of the fine biochemical details of higher brain functions is stunningly deep and broad, which means that our tools for affecting them are (to put it kindly) not very well worked out. The next time someone tells you confidently that a given antidepressant works by inhibiting serotonin uptake, smile at them kindly, because that may not be the primary mechanism at all. Even if it were, you can quickly send your informant into the deep mud by asking a simple series of questions about what happens, exactly, once that serotonin is left to make its way alone in the synapse.

There are drugs whose mechanism we know fairly well (many of the cardiovascular ones can be found here). But even there, it’s very difficult to say which way of lowering blood pressure will prove most effective. Physicians try them one at a time, which is fine - but it does show that even in this well worked-out area there are many unknowns.

And that brings up another key point: every drug has side effects, and every drug is toxic if you take enough of it. This shouldn’t be news: Paracelsus tried to tell us in the 1500s that the dose makes the poison. Modern drugs have higher margins of safety than many older ones, but they can vary from person to person, often in unpredictable ways.

That’s the reason that no one ever rests easy in this business. You have to get to Phase III before you can say anything definite about human toxicology (unless your drug’s toxicology is rather too definite to start with). And even the widest, longest, most expensive Phase III trial is nothing compared to the real world and the real patient population. There’s no way around it - if enough people take a drug, some of them are going to react badly. The number needed for that to happen varies, of course, as does the definition of ’react badly’. But the fact remains, and it will remain.

So that’s why I’m a reluctant customer of my own wares. I’ve judged the safety of the blood pressure medicine I take to be a good bet compared to leaving the condition untreated, and I’ve had no noticeable side effects. I count myself fortunate to have had no other calculations of this sort to make. But I realise that it is a calculation, that it’s one that has to be made every time, and that the answer will not always be the same.