Art inspired by science should be more than just a pretty picture, says Philip Ball

Art inspired by science should be more than just a pretty picture, says Philip Ball

Several years ago I attempted to launch a project that would use the methods of chemical synthesis as a means of sculpture, by creating plastic art at the molecular scale. I shelved it when I saw that it was unrealistic to expect chemists to think like artists: they generally inherit an aesthetic that owes more to Platonic conceptions of beauty than to anything the art world tends to employ. 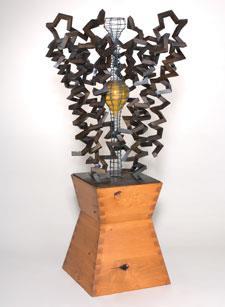 Birth of an Idea is modelled on an ion channel

But the experience brought me in contact with several people who seek to integrate the molecular sciences with the visual arts. One of them is Julian Voss-Andreae, a former physicist who now works as a sculptor in Portland, Oregon, US. Despite his background, much of Voss-Andreae’s work is inspired by molecular structures; his latest piece is a metre-and-a-half tall sculpture of an ion channel, commissioned by Roderick MacKinnon of Rockefeller University in New York, who shared a Nobel prize for elucidating its structure and mechanism.

The piece has the elegance and textures of twentieth-century modernism: with its bare, dark metal and bright wire, supported on a base of warm, finely joined wood, it wouldn’t have looked out of place at the recent Louise Bourgeois exhibition at London’s Tate Modern gallery. The title, Birth of an Idea, alludes to the role of ion channels in creating the electrical impulses of our nerve cells.

I find it hard to imagine that sculptures like this could be made by anyone who did not have a deep understanding of what molecules are and what they do. Iconic images of DNA’s double helix are commonplace now (the Cold Spring Harbor Laboratory on Long Island has two), but do little more than express delight at the graceful spiral-staircase shape, while implicitly failing to acknowledge that this is crucially dependent on the surrounding solvent.

Voss-Andreae’s molecular sculptures have more to say than that. His Heart of Steel  (2005), placed at an intersection in the city of Lake Oswego in Oregon, is a steel model of the structure of haemoglobin, with a red glass sphere at its centre. The twisting polypeptide chains echo those depicted in physical models made in the early days of protein crystallography, photos of which would appear in research papers in lieu of the fancy computer graphics we see today.

But Heart of Steel  engages with the chemistry of the molecule too, because the steel structure, left exposed to the elements, has gradually (and intentionally) corroded until its coils have become rust-red, a recapitulation of the iron-based redness of our own blood cells. Blood and iron indeed, as Bismarck said of the German Empire.

It’s no surprise that Voss-Andreae is sensitive to such nuances. As a graduate student at the University of Vienna, he was one of the team led by Anton Zeilinger that conducted a ground-breaking experiment in quantum mechanics in 1999. The researchers showed that even molecules as big as C60 can reveal their fundamentally quantum nature under the right conditions.

Zeilinger’s group found that a beam of them, passed through a diffraction grating, will exhibit the purely wavelike property of interference. A subsequent experiment on C70 showed how interactions with the environment (a background gas of different densities) will gradually wash away the ’quantum-ness’ thanks to the process of decoherence, which is now recognised as the way the classical world emerges from the quantum.

Such experiences evidently inform Voss-Andreae’s Quantum Man  (2006), a figure 2.5 metres tall made from thin, parallel steel sheets that looks ’classically’ solid when seen from one angle, but almost disappears into a vague haze seen from another. C60 itself has featured in more than one of Voss-Andreae’s sculptures: the football cage, 9 metres high, sits among trees in Tryon Creek State Park in Oregon.

Among Voss-Andreae’s latest projects is a sculpture based on foam. ’My obsession with buckyballs seems to be due to their bubble-like geometry, which got me started on this new project,’ he says. His aim is to produce a foam network that is ’adapted’ to a particular boundary shape, such as the human body. This involves more than simply carving a block of foam to the desired contours (as was done, for example, in making the spectacular swimming stadium for the Beijing Olympics) - as he says, ’the cellular structure "talks" with the boundary.’

Heart of Steel, in Lake Oswego, Oregon, immediately after installation (left), after 10 days (centre), and after 1 month (right)

Voss-Andreae is attacking the problem both mathematically and experimentally, casting a resin in the gaps between an artificial foam of water-filled balloons. Eventually he hopes to cast the resulting structure in bronze.

I admit that I am not usually a fan of attempts to turn molecular shapes into art; all too often this draws on the chemist’s rather particular concept of beauty, and a pretty picture does not equate with a piece of art. But Voss-Andreae’s work is different, because it seeks to convey some of the underlying scientific principles of the subject matter, even to viewers who know nothing about them. That’s what good ’sciart’ does: rather than seeking to educate, it presents some of the textures of science in a way that nudges the mind and enlivens the senses.