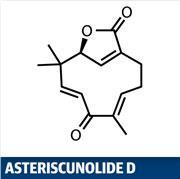 Medium rings are a beguiling feature found in a host of natural products, owing to their behavioural oddities. While the properties and synthesis of smaller rings (three to six atoms in size) are well known, and that of true macrocycles can at least be estimated, each medium ring has its own personality. Without the predictable rigidity of the smaller rings, or the freedom of a macrocycle, rings of 7-14 atoms can behave very strangely, and can often be reluctant in their making.

Asteriscunolide D is one such beast, containing an 11-membered triene ring at its heart - typical of the humulene class of natural products.1 This family is popular in biological circles, owing to members’ activity against a variety of cancer cell lines.2 However, synthesis of the humulene ring system is awkward - one cited example using a Horner-Wadsworth-Emmons olefination achieves a barely detectable 3% yield.3 All this gives Barry Trost and his team at Stanford University in California, US, more than enough reason to attempt its synthesis, and showcase their use of thionium ions as ’super-carbonyls’ - equivalents of that endlessly useful functional group, but with a little more activity.4 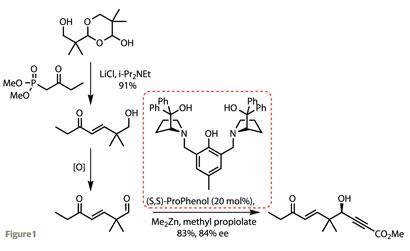 The team began its synthetic efforts with a typical carbonyl reaction: aldol addition of isobutyraldehyde to formaldehyde. The product formed a dimer, which was cracked under warming in preparation for a Horner-Wadsworth-Emmons olefination, building the required enone with ease (figure 1). The next move was to introduce asymmetry using a neat catalyst-controlled alkylation, after oxidising the neopentyl alcohol to an aldehyde. The catalyst in question is the rather large (S,S)-ProPhenol, which - as its name suggests - contains a phenol group flanked by a pair of proline derivatives. Using this, in conjunction with dimethyl zinc, directed enantioselective addition of methyl propiolate to the aldehyde, generating the desired secondary alcohol in excellent yield and stereochemical control.

The purpose of installing the acetylene functionality was to form the butenolide ring, something the team accomplished in only one step. Treating the acetylene with allyl alcohol and a ruthenium catalyst prompted direct alkyne-alkene coupling, completing the lactone and leaving a pendant aldehyde as a useful functional handle (figure 2).

The team immediately converted this aldehyde into a thioacetal, followed by forming a trimethylsilyl (TMS) enol ether from the enone. This slightly strange mixture of functional groups is actually their intended substrate for their postulated ’super-carbonyl’ aldol equivalent. All that was required was a little encouragement from dimethyl(methylthio)sulfonium tetrafluoroborate (DMTSF). This prompted formation of a phenyl sulfonium intermediate, similar in character to a carbonyl group but much more reactive. Reaction with the TMS enol ether was prompt, generating a useful yield of the 11-membered ring under very mild conditions (figure 3).

Usefully, the product contained a phenyl sulfane group, which could be eliminated to provide the final alkene present in the natural product. Although this might sound simple, the mechanism for elimination is highly substrate dependant - and when the substrate is a medium ring, a bit of luck as well as forethought is required. Oxidative elimination (commonly used in conjuction with phenylselenium groups) resulted in the undesired beta,gamma-unsaturated ketone. However, alkylative thioether elimination gave the desired E-olefin, completing their synthesis in only eight steps. What’s more impressive is that their route is entirely protecting group free - while the TMS group is normally considered a protecting group, it is more of an activator in this case.