The uniqueness of the structures nature generates can be compelling to a total synthesis obsessive like me - I’d written most of another article before I saw this and immediately changed the plan. Oxabicyclo[3.2.2]nonane structures are rare enough - but gelsemoxonine goes one further and has an extra four-membered azetidine ring, making for a considerable synthetic challenge. Of course, I’m not the only chemist with an interest in this structure - after isolation, a further reassignment was required to settle on the target.1 However, definitive confirmation of this structure has waited until this first synthesis by Tohru Fukuyama and his team at the University of Tokyo, Japan.2

The team’s synthetic odyssey began with a one-step synthesis of a racemic hydroxy enone, which they planned to enantioenrich - or in other words, to selectively react one of the two enantiomers present to deliver only their desired enantiomer. Because the lone stereocentre is an easily-racemised acetal, they could do this using a dynamic kinetic resolution approach.3 The team employed a lipase enzyme to selectively form acetate esters of one enantiomer of the alcohol starting material. As the remaining alcohol racemises, the desired enantiomer keeps reacting until all the starting material has been converted to the ester. The first attempt at this was only partially successful, giving only a 74 per cent enantiomeric excess. However, applying a second lipase finished the job to give nearly enantiomerically pure material (figure 1). 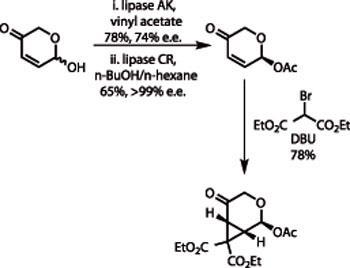 The team was able to optimise this biological brewing to produce over 10g of the chiral building block, and immediately used its chirality to control two further stereocentres. They did this by treating the enone with diethyl bromomalonate and 1,8-diazabicyclo[5.4.0]undec-7-ene (DBU), a non-nucleophilic base. Deprotonation of the malonate and conjugate addition into the enone establishes a first carbon-carbon bond, but domino addition back into the malonate (displacing the bromide) forms a second, neatly completing the cyclopropane in a single step.

After several steps to manipulate the oxidation state of the malonate, the group was able to append an indolinone using a two-step aldol condensation and elimination approach. They were then ready for their pi?ce de r?sistance  , a very neat divinylcyclopropane-cycloheptadiene rearrangement (figure 2). This kind of sigmatropic rearrangement relies on the fact that the strain in cyclopropane rings allows them to react very much like alkenes. The rearrangement opens the cyclopropane, breaking one carbon-carbon bond, and forming another to complete the key seven-membered ring.

Courtesy is an age old virtue

With the critical bicyclic ring system installed, the group was left with the challenge of installing the azetidine ring that interested me so much. This took quite a lot of planning and work, as they also needed to establish nitrogen-based functionality using a Curtius rearrangement (figure 3). Treating a bare carboxylic acid with oxalyl chloride, they firstly formed an acyl chloride. This was displaced with azide, generating the extremely reactive acyl nitrene intermediate after losing a molecule of nitrogen. The acyl nitrene then rearranges to form an isocyanate - just barely less reactive than the previous intermediates - which couples with benzyl alcohol to generate an amine, ready-protected as a carbamate. What is perhaps most notable about this exceptionally useful reaction is that it’s been around for over 120 years.4 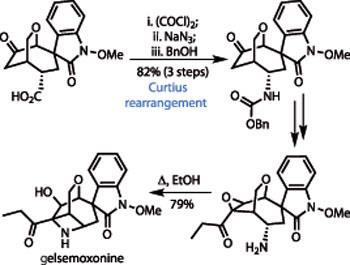 Further effort was required to give the freshly generated amine something to react with. A few steps later, both the propanone side chain and a suitably placed epoxide had been installed. After removing the protecting group from the amine, simply heating in ethanol was enough to encourage it to open the epoxide, closing the azetidine ring and leaving a correctly configured secondary alcohol to complete the target.