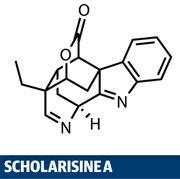 Ring strain is a fascinating phenomenon - one that is best understood with plastic modelling kits, wearing safety specs for ring sizes of four or less. These smaller rings are packed with energy, resulting from both tight bond angles (deviating from the tetrahedral ideal of 109.5?), and forced eclipsing of exocyclic bonds.

These features bring about unique reactivity patterns, such as the olefin-like behaviour of cyclopropanes, and ultimately the indispensible synthetic properties of epoxides. However, when small rings get together to form polycyclic cages like that found in scholarisine A, steric congestion means that normally delicate bond-forming reactions require the synthetic equivalents of sledgehammers and crowbars.1

The target is a member of a large indole-alkaloid super family of natural products, and is so fresh out of the isolation glassware, it is yet to be tested for its biological activity. However, as the putative biosynthetic precursor, picraline, is a promising lead in type 2 diabetes research, expectations are high. Amos Smith and his team at the University of Pennsylvania, US, used the unique behaviour of epoxides to help them build the core cage system, demonstrating both facets of small ring chemistry in a neat natural product synthesis.2 They started with a relatively advanced intermediate, already bearing a cyclohexene moiety fused to a

-valerolactone group, and with a pair of ring junction stereocentres already set. The team first reacted the carbonyl group with cyanobenzothiazole and base; then ethyl iodide and base to add a nitrile group and an ethyl group to the same carbon.

The sole olefin was then treated with the commonest of epoxidation reagents, meta-chloroperbenzoic acid, resulting in diastereoselective oxidation, with a 3:1 bias towards their desired isomer. Next, under fairly forcing conditions (that’s a lot of hydrogen pressure!), reduction of the nitrile group to the corresponding amine allows the amine to attack the epoxide and form the piperidine ring, a key feature in the target and the beginnings of the polycyclic cage (figure 1).

Protecting this new amine and then oxidising the secondary alcohol set the team up for yet another cyclisation - one straight out of the ’How to build heterocycles’ cookbook. Using a modification of conditions developed by Emil Fischer in 1883, the cyclohexanone reacts with 1-benzyl-1-phenylhydrazine, first forming an enamine, followed by a [3,3]-sigmatropic rearrangement and eventually indole creation (figure 2).3 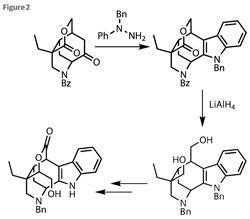 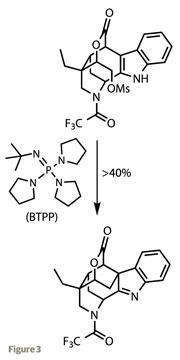 The intermediate now in hand looks remarkably like the target, but actually has one too few rings. Unfortunately, the missing ring is a cyclohexane, buried deep within the structure, requiring some pretty substantial structural manipulation. Treating the lactone with lithium aluminium hydride comprehensively reduced the lactone to a bare diol, which the team neatly and selectively monoprotected (LiAlH4 has performed this trick on many of my own intermediates, and not always to plan). Oxidation and one-carbon homologation of the remaining alcohol, then transformation to a different lactone was perhaps a little steppy, but as the yields are good, this doesn’t detract too much from the synthesis.

The key cyclohexane ring, though, was still absent; the team left its installation to the last few steps of the synthesis. Treating the last free hydroxyl group with methanesulfonyl chloride formed a mesylate group, an excellent leaving group similar to the more common tosylate group. Reaction with the indole moiety was prompted by deprotonation with tert-butylimino-tri(pyrrolidino)-phosphorane (BTPP), forming a carbon-carbon bond from the indole 3-position (figure 3).4 A final deprotection freed the piperidine ring, which was oxidised with iodosobenzene to form the imine part of the tetrahydropyridine ring found in the target.

This smart endgame concluded a chemically efficient - yet somewhat lengthy - synthesis of a target with much biological promise, if not proven ability.