Simon Campbell reflects on the RSC's achievements during his presidency.

Simon Campbell reflects on the RSC’s achievements during his presidency.

When Harry Kroto asked me to stand for election as RSC president I had little idea of what lay in store, but the past three years have been exciting, rewarding and enjoyable. The RSC has made significant progress in many areas, and is now in a strong position to face future challenges.

We have worked hard to further our charter object of advancing the chemical sciences, where integration of activities under our Campaign for chemistry has had obvious impact in the UK and beyond. Recent examples of our influence with policy makers include reconsideration of chemistry provision at Sussex, the budget announcement of 3000 new specialist science teachers and Hefce voicing ’serious concern’ over the provision of chemistry in the UK. We welcome these positive initiatives, but will continue to stress that chronic under-funding of teaching and research is still the fundamental problem. 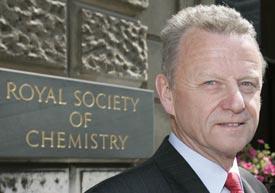 Our educational activities are continually expanding and our joint projects with chef Heston Blumenthal on Kitchen chemistry and Bill Bryson on A short history of nearly everything were well received in secondary schools throughout the UK. The RSC Bill Bryson prize for creative schools science writing is a further initiative to stimulate interest and demand, which builds on the encouraging increase in the numbers of A-level students taking chemistry at university. Our successful AimHigher initiative has reached thousands of pupils from non-traditional backgrounds and a further Hefce award will support expansion into Chemistry for our future.

I am confident that this pilot programme will transform into a full project in two year’s time and that we are taking the lead in building a strong and sustainable chemical science base in the UK. In a further example of our leadership role, the RSC is acting as the holding company for the Chemistry Innovation Knowledge Transfer Network which was recently funded by the DTI to stimulate innovation in the chemical sciences sector by promoting collaborations and knowledge transfer between industry and academia.

I am pleased to see how our international activities are developing. We played a key role in founding the European Association for Chemical and Molecular Sciences and on lobbying for chemical sciences to be included in the European Commission’s framework programme. We have organised joint activities with national societies in China, Korea and Singapore, which will be extended to Brazil, Cuba and Japan, and we will also consider how membership packages might better reflect local conditions and needs. Our Archive for Africa has been very well received and will be extended as part of our effort to build scientific capacity in the developing world, which is a key step towards social and economic advancement. We also recognise our responsibilities in a broader global sense and are actively contributing to debates on sustainable development and energy policy.

The new RSC website is faster and more user-friendly, and broadens the services we offer. Most RSC documents are now available online, consistent with more open communication, and RSC News has been extended to include an international section.

Our first annual general assembly was held in November, gathering opinions on RSC strategy and direction now incorporated into our three-year strategic plan. Longer term financial planning assumes a decline in revenues if an open-access, author-pays model proves viable for scientific journals, but our publishing activities are robust with an international reach attracting authors and subscribers worldwide. Some journals are now weekly and we have launched two publications to better serve the bioscience and physics communities.

It has been my privilege and pleasure to serve as president of the RSC and I very much appreciate the tremendous support, enthusiasm and commitment members have offered me and the RSC. I am confident that exciting times lie ahead for the RSC, but July is the time to hand over to the new president, so I wish Jim Feast, our new chief executive Richard Pike, and all our members every success in the future.