The new Manchester interdisciplinary biocentre is a haven for life science researchers interested in the interface with physical sciences, explain Andrew Munro and Nigel Scrutton

Biochemistry in many UK universities has moved away from its chemical roots and the trend has been to focus on the more qualitative and descriptive aspects of biology. The tide is turning at the University of Manchester with new developments at the interface of biology and the physical sciences. 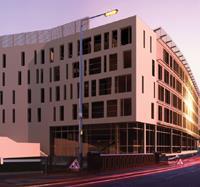 Traditionally chemistry-based disciplines such as mechanistic enzymology have felt the squeeze in UK life science departments because of expansion in the more descriptive aspects of cell and molecular biology.

The erosion of chemistry and quantitative thinking in undergraduate life sciences teaching has ushered in an era in which these graduates are poorly equipped to tackle the challenges at the chemistry-biology interface in fields such as molecular enzymology, protein structure/dynamics and spectroscopy.

It is against this landscape that our enzymology group, one of the leaders in Europe, is moving from the University of Leicester to the University of Manchester to form a nucleus of activity in biological redox catalysis and mechanism. We have developed a highly integrated and effective group at Leicester but we have found the constraints of working in a traditional life sciences department incompatible with our desire to integrate more closely with chemists, physicists and engineers.

The compartmentalised thinking and lack of interdisciplinary vision in many life sciences departments is too restrictive. It’s not sufficient to make a token appointment in chemical biology; what is needed is joined-up thinking and strategic vision beyond the familiar boundaries imposed by university structures and departments.

In the field of redox biology strong interactions with, for example, specialised forms of spectroscopy are essential.

We have developed collaborative links over the years with other institutions but our work needs much stronger interaction in these specialised areas, ideally within the same research building.

This battle has not been won at Leicester - not so much through lack of resource but, perhaps, more through low levels of enthusiasm for more chemically-based technologies in the school of biological sciences. The change of attitude and the breadth of the vision at Manchester is refreshing.

The MIB is a bold venture that will enable integrated approaches to solving complex problems in biochemistry. The environment facilitates more lateral thinking and encourages consortium-based research activity with more ambitious goals.

The Leicester team has our expertise in fast reaction kinetics, molecular enzymology, spectroscopy, thermodynamics and protein engineering and interests in redox enzyme mechanism. It also comprises David Leys with expertise in structural biology and dynamics of redox enzymes and Michael Sutcliffe, a computational and physical chemist, with skills in reaction simulations and modelling.

Along with colleagues at Manchester, we will set up the centre for redox enzymology at Manchester. Studies of enzyme mechanisms, structures and biological energy conversion within the group will operate alongside the centre of excellence in biocatalysis, biotransformations and biomanufacture, thus providing a highly integrated group focused on the structure, mechanism and biotechnological exploitation of biological catalysts.

Having computational analysis, biochemistry, biophysics and chemistry on a single floor of a research building is clearly beneficial but the key change is the willingness, at the highest level, to embrace interdisciplinary science and to back it with substantial investment, thus really putting the ’chemistry’ back into ’biochemistry’.