In situ with Donna Blackmond

The chirality expert on late-night notes and Harrius Potter

Donna Blackmond is a professor of chemistry at the Scripps Research Institute in California, US. Her work focuses on reaction kinetics and prebiotic chemistry, in particular the origin of homochirality. In 2019 she received the IUPAC Award for Distinguished Women in Chemistry or Chemical Engineering. She was talking to Katrina Krämer at the 2019 American Chemical Society national meeting in Orlando, Florida. 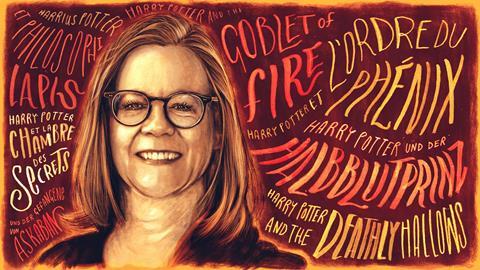 Donna Blackmond is a professor of chemistry at the Scripps Research Institute in California, US. Her work focuses on reaction kinetics and prebiotic chemistry, in particular the origin of homochirality. In 2019 she received the IUPAC Award for Distinguished Women in Chemistry or Chemical Engineering.

I exercise a lot. I live in California near the beach, so you have to stay in shape because everybody does. I do a lot of walking, though I don’t go swimming much. The water is a bit cold on the Pacific Coast, it’s probably warmer in Cornwall than in Southern California. I have a group of friends that meets at the bottom of my street every Sunday night to watch the sunset together.

I love fine dining and fine wine. I really like French cuisine. I have a grant with the Simons Foundation, which takes me to New York three times a year. Several of us are working our way down the list of the best restaurants there – Daniel, Bouley, Blue Hill Farm. But the ones I like the best are not necessarily the ones that are the most raved about.

I lived in France for a little while and also in Germany. I’m really bad at speaking foreign languages but I’m much better at reading. When I’m at an airport in Germany, I usually pick up a couple of crime novels to try to keep up with my German.

I have read Harry Potter in English, French, German and Latin. My son is about the same age as J K Rowling’s daughter and so he grew up with the books as they were being published, before the movies were made. I think it’s a shame that kids now might see the movies before they read the books.

In the summer of 2001, the year the first Harry Potter movie was made, we were on holiday in Fort William, Scotland. We went to see the steam train there and it turned out that was the train they used in the movie. They had just finished filming. The staff on the train saw my seven-year-old son wearing a Gryffindor T-shirt, so they let him get on and shovel coal.

Almost everybody in my family has a Stem (science, technology, engineering and mathematics) background, so it was very clear that I had to do a Stem course. My father thought all of his daughters should become engineers. It was at a time when people were starting to promote women in science and they said, ‘Well, you’re good at chemistry, you’re good at math, be a chemical engineer.’ So that’s what I studied.

I figured out what I wanted to do when I was about 35. I spent three years in my early 30s working on at Merck. This was during the development of anti-HIV protease inhibitors. That was when I realised how much I really love organic chemistry. In a lot of ways that was a turning point for me, away from mainstream chemical engineering. Now I’m probably considered more of a chemist than an engineer.

The hardest thing I’ve ever done was teaching organic chemistry for the first time. It was to 246 pre-medical students when I was on sabbatical at Harvard. Standing up in front of 1000 people at an American Chemical Society national meeting to talk about my research is like a shot of adrenaline, but teaching undergraduates makes me much more nervous.

I often get my best ideas in the middle of the night. I was working on the Soai autocatalytic reaction – a complicated system where the catalyst is the product so it gets faster as it goes on. We were trying to understand how it amplified enantiomeric excess. I woke up in the middle of night and derived the mathematical model for the reaction in the margins of a newspaper. We published the first mechanistic study of the Soai reaction as part of a collaboration with John Brown at Oxford, one of the most enjoyable of the many collaborations I’ve had.

Could there be a mirror image world where all the amino acids and l-sugars are of the other enantiomer? I think it is really hard to even fathom what any other life form would look like, because we only know the one we have. People coming up with interesting concepts of aliens in movies doesn’t bother me. What bothers me is things that are just scientifically impossible – jumping onto a roof of a moving train and then standing up – that just doesn’t happen.