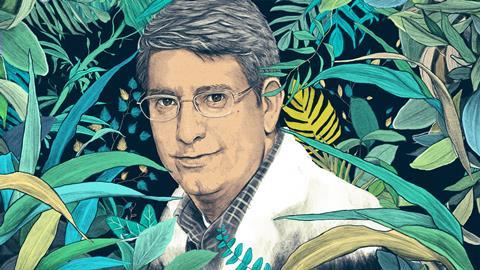 In situ with Edgar Cahoon

The biochemist and plant scientist talks about growing up on a dairy farm in Eastern Virginia, gardening, biking and Cornhusker football

Edgar Cahoon is a biochemistry professor and director of the Center for Plant Science Innovation at the University of Nebraska in Lincoln (UNL). His research group conducts basic and applied research on plant lipid metabolism that aims to enhance the nutritional and industrial value of crop plants.

I grew up in Eastern Virginia in the US on a dairy farm. My father had passed away, and my mother got remarried when I was about five years old to a dairy farmer. Later, we went to growing crops – soybean and corn – and I really developed an interest in plants. I was fascinated by all the chemical diversity that you can see in them.

I wanted to be a scientist. I was just curious about how things work, and I guess science is what you naturally gravitate to when you are that way.

At university, I started out in horticulture, but realised that didn’t tell me anything about what I wanted to know, which was how plants work. So, I switched to biochemistry and have been doing plant biochemistry ever since.

My first car was a 1980 Chevrolet Citation, and I got it when I was a sophomore in college at Virginia Tech. I did a cooperative education programme and worked at the Food and Drug Administration in Washington, DC. I needed the car to commute – I was part of a carpool and had to drive people around. So yeah, I drove five big men in a little Chevrolet Citation.

I have moved around a lot in my career. I started out working at a large company, after my postdoc. When I’ve changed jobs it’s not because I wasn’t performing well, I just wanted more of a challenge and more freedom in my science. It took a lot of courage to make these moves that ended up with me being at a university, but I am happy I did that. Maybe the hardest thing I’ve done is to take risks when trying to find a situation that I was most happy with for my career.

In industry, you have to learn how to not be an egomaniac. You’ve got to be able to work in teams, and this is quite useful for going to a university. My colleagues who haven’t been in industry sometimes have a different perception about how they share resources and so forth. Industry is collaborative – typically you don’t do a project on your own.

I garden a lot, I enjoy that. In the summertime, the tomatoes and cucumbers that we eat are almost all from our garden. But then, during the wintertime and other parts of the year when the garden isn’t growing anything , we buy our produce from the grocery store.

I also do a lot of road biking – going long distances on the bike. Nebraska is quite nice for that, we have a lot of backroads where the traffic is not so heavy. You can see the countryside on a bicycle, and get some exercise and fresh air. I am part of a cycling club, and they have a 60-mile ride that is not competitive.

Being at UNL, you have to like Cornhusker football [the university’s American football team]. We all keep up with that. There is a lot of local interest in seeing what the team is going to be like for the fall. There is worry that there won’t be football this fall.

A coffee shop is my favourite place to think and get work done. I like being away from people and distractions like television, and just focusing on what I do. Sometimes at coffee shops you can also overhear other people’s conversations, and it can be quite good entertainment.

I like to think that I am doing synthetic biology, but I realise that we don’t really know what we’re doing in many cases. We still have so much basic information to learn about how a cell works before we can ever be able to really predictively manipulate it. We talk about synthetic biology – that someday we will be able to sit at a computer and have all of this omics data in hand and just dial-in whatever change we want to make – but there is still so much basic knowledge to learn.

There maybe is a feeling among the broader scientific community that we have learned everything there is to know on a basic level … that we can now just go in and very carefully manipulate things. But we will need to have a major focus on foundational basic research rather than making this huge leap towards translation. We can’t lose sight of the importance of foundational research.