From looking at the cover you’d be excused for thinking we were talking about the atrocious weather that affected many areas of Europe during January. In the UK in particular, the cold spell caused weeks of disruption. And with the public transport network in complete chaos, road closures and thousands of schools closed, absenteeism was rife. Figures flew around the media in an attempt to estimate the financial loss caused by the snow, but undoubtedly the cost to the nation will be in the region of billions. Unquestionably the chemical industry will have to foot its share of the bill. 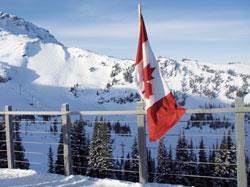 But no, cast your eyes over the cover and guess again. The beautiful cover image is across the Atlantic - Mount Whistler in Canada. You may be aware that Canada will be hosting the 2010 Winter Olympics next month but, as always, our focus is chemistry and the chemical industry.

What do we know about the chemical industry in Canada? We know that it is the fifth largest manufacturing sector in the country in terms of sales and it keeps 80 000 people employed in more than 3000 firms. We also know it is well supplied with highly qualified professionals by a robust and well-funded educational system. Internationally, Canada is said to have all the key ingredients to make it a global leader in the chemicals industry.

However, the country seems to be missing the mark in converting that raw talent into widespread success and international recognition. Very rarely do we hear about Canada’s chemical industry, and when it does manage to make it into the news it is seldom big news.

There is a solid chemicals industry in Canada - nine of the top 10 chemical companies in the world have production facilities in the country - but a large number of the firms operating there are owned by US and European multinationals. Chemical exports from the country have more than doubled in the last decade, hitting C$32 billion (?19.7 billion) in 2008 and the sector spent C$197 million (?115.9 million) on research and development in 2007.

In 2006, Canada was the first country in the world to categorise the around 23,000 chemical substances in use there before comprehensive environmental protection laws were created. Europe and the US are lagging behind - currently battling with their own chemical categorisation legislation in the form of Reach (registration, evaluation, authorisation and restriction of chemicals) and the Toxic Substances Control Act.

However, despite this, Canada seems to be repeatedly sidelined by its imposing neighbour the US, which has arguably squeezed more from its intellectual capital.

So why is the country playing second fiddle to the US and other regions? It seems that the problem is innovation, or rather the lack of it. The transition from the vibrant research base to profitable industry projects seems to be a sticking point for the country. Many blame it on the government, whom they accuse of, among other things, not having a clear vision or policies that attract new business.

However, as you will see from the feature, there are success stories. Individual companies that have taken root in the world’s second largest country and flourished. So while there may be some catching up to do, I think the future is bright for chemistry in Canada.