World leaders gathered in New York, US, at the end of September to attend a summit on the UN Millennium Development Goals 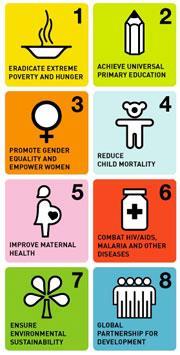 The eight MDGs were set in 2000 and all UN member states and a number of international organisations agreed to achieve them by 2015. They include eradicating extreme poverty, reducing child mortality rates, fighting disease epidemics and ensuring environmental sustainability. With the deadline drawing near, the meeting discussed achievements and how to accelerate progress.

Although some lament the lack of opportunity given to science to help achieve these goals - a subject discussed at a recent gathering in Nigeria of journalists and scientists from more than a dozen African countries - we can still find science contributing to finding solutions to the MDGs. In particular, reducing carbon dioxide emissions and protecting the ozone layer, providing HIV and malaria treatment, and access to safe drinking water.

The Montreal Protocol, an international treaty specifically created to protect the ozone layer, achieved universal ratification and all the world’s governments are now legally required to phase out the use of ozone-depleting substances. A great deal has been achieved thanks to this treaty - global ozone and ozone levels in the Arctic and Antarctic regions are no longer decreasing, although not yet increasing - which has been hailed as a great success and also has positive ramifications for public health and climate change.

Scientific advances have also had an enormous impact in combating HIV/Aids, malaria and other diseases. Availability and distribution of drugs are, however, still an issue in many countries, and the original goal of providing HIV/Aids treatment for all those who need it by this year has not been met. However, scientists continue to work towards improving treatment for the disease. In relation to malaria the situation is not much better. Although treatments are available, the disease continues to kill 1 million people each year in Africa, mostly children. To prevent its spread, many African governments distribute insecticide-treated nets to pregnant women and children under the age of five as the World Health Organization estimates that these nets cut malaria transmission by at least 60 per cent.

Finally, the work of scientists has been essential in making very good progress towards halving the proportion of people without sustainable access to safe drinking water by 2015, though this remains a challenge in many parts of the world. Unfortunately, although the world is on track to hit the drinking water target, the goal of halving the number of people without access to basic sanitation by 2015 looks set to be missed. If the current trend continues, the number of people who lack access to decent sanitation will hit 2.7 billion by 2015. With water described as ’a cross-cutting element for reaching every other development goal’ during World Water Week last month, a stronger focus should be placed on this precious resource.

Although the role of science has not been strongly emphasised in discourse surrounding the MDGs, the above are examples of areas where the work of scientists contributes towards making the world a better place.