At this stage in the world of organic chemistry, you’d have to think that many of the great reactions that can be stumbled across with known reagents have probably been found. I’d like to be proven wrong, but my guess is that there’s not going to be another Diels–Alder or Friedel–Crafts out there. That’s not to say that there aren’t new categories of organic synthesis waiting to be found; I’m sure that they exist. But we’re probably not going to find them without looking harder for them, and looking on purpose. This is especially true since reactions that approach ideal standards often feature highly active catalysts – you don’t find high selectivity and turnover without a lot of deliberate searching. 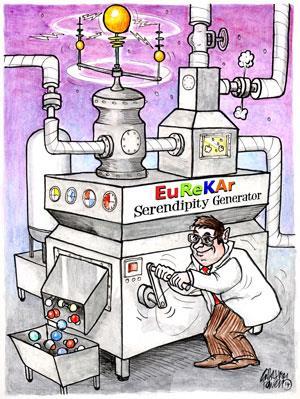 The problem is, you have to have the seed of something interesting in the first place before you start to develop it. It’s not so easy to plan on having unusual-but-worthwhile preliminary results (next Tuesday, perhaps?), but I think we’re going to have to learn how to generate those, too. Recently I’ve seen several papers devoted to high-throughput reaction discovery – deliberate mix-and-match searches for new catalytic activity. Not everyone seems thrilled with this approach (at least, when I’ve written about it on my blog, the comments have been mixed). To some people, the whole idea of ‘engineered serendipity’ seems like cheating. Shouldn’t these reactions be brought into the world by talent and intellect, instead of by trawling through chemical space with a giant net?

But sheer power of intellect was not how many of the most useful reactions were first discovered. They were accidents that occurred on the way to something else. The science fiction author and biochemist Isaac Asimov once said that the sound of scientific discovery wasn’t someone yelling ‘Eureka!’; it was someone with a puzzled look saying ‘Now, that’s strange.’ The difference is that the reaction discovery folks are not, technically, on their way to something else. Banging around looking for accidents is the whole point.

It’s true that that’s not how the great organic chemists of the past did it, or at least, it’s not how they said they did it. But I think there are some good reasons that things have changed. For one thing, early organic chemistry had plenty of clear destinations to work towards, and many gaps in the landscape. No one had ever synthesised strychnine, quinine, or erythromycin. No one had any handy ways to make chiral epoxides, perform directed aldol reactions, or couple two aromatic rings together with a single bond. With so many directions to go in, there were bound to be interesting things occurring on the side. But another reason that people didn’t try so much deliberate reaction discovery, I think, is the state of analytical chemistry.

Sheer power of intellect is not how many reactions were discovered. They were accidents on the way to something else

My guess is that there are really fascinating reactions occurring all the time, in labs all over the world, but at such a low yield that no one ever sees the products. Modern mass spectrometry and NMR techniques can bring these things to light, and once we know that they exist, we can try to optimise them. The reaction discovery people take advantage of this to run as many simultaneous small-scale reactions as possible, trawling through the multi-well plates looking for signs of something worthwhile. This wouldn’t have been possible 50 years ago (or even 25). Everything would have had to be run at larger, more troublesome scales. And to be detectable, the reactions themselves would still have had to work so well on the first pass that the chances of finding anything at all would be slim to none.

We still have plenty of destinations, though, for people who prefer to take a more incisive approach. Would you like to install a single fluorine on a selected aliphatic carbon? Form carbon–carbon bonds at will between secondary chiral centres? Cleanly change a given benzene derivative into its corresponding pyridine? Run any number of current reactions without having to fiddle around with protecting groups or expensive stoichiometric reagents? These are all waiting to be claimed – but finding them is not going to be like finding the 210th way to dehydrate an oxime, either. Plenty of intellect will be needed, but probably plenty of good fortune, too. Industrialising the process might not be such a bad plan.