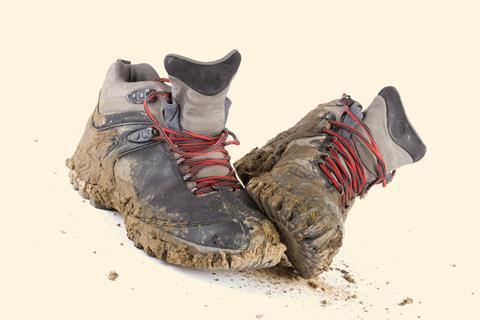 To a forensic investigator, a muddy boot presents a fertile source of clues

Soil tells a story, one that’s often locally or regionally specific. This story can literally stick with us, spreading everywhere we go. One might say they’ve never been to a certain cornfield near Lincoln, Nebraska or walked along a particular bank of the Limpopo River in southern Mozambique. The soil trapped in shoe or vehicle treads, stuck to clothes or bags, lodged under fingernails, or caught in hair, may tell a different story.

Colour, texture, particle type and size, mineral and organic compound composition and the microscopic organisms present can all help pinpoint a soil sample’s source to a likely area. An expert comparing reference and questioned soil samples works to be exclusionary, ascertaining if a questioned sample can – or cannot – be excluded from sharing a source with reference soil.1,2 Whittling soil source possibilities down to a particular shore, slope or scene can sharpen investigative focus.

Soil evidence provides critical insight into the who, what, when, where and how of crime

One of the earliest criminal cases involving geological evidence was the 1904 murder of Eva Disch in Germany, which saw forensic scientist Georg Popp aid in connecting a crime scene to a suspect.1 A handkerchief stained with snuff, coal and hornblende dust found at the crime scene – a bean field – pointed investigators to a particular snuff-using man working at the local coal-burning gasworks and hornblende quarry. Dirt layers collected from the man’s trouser cuffs seemed to track his post-offence movements. The lower layer of dirt was consistent with the bean field, while the upper layer pointed to the path between the field and the suspect’s home. He subsequently confessed.

In the nearly 120 years since this case, the analysis of soil evidence has continued to provide critical insight into the who, what, when, where and how of crime. Analytical advances in the intervening years continue to dramatically narrow the field – figuratively and literally – in the search for crime scenes and suspects.

Recent work from Xuebin Xu and colleagues at the Chinese Academy of Sciences highlights the impact of method development on active case work.3 Researchers combined laser-induced breakdown spectroscopy (Libs) and Fourier transform infrared total attenuated reflectance (FTIR-ATR) spectroscopy, both of which have been used in a variety of forensic applications including the analysis of soil,4 hair,5 glass,6 blood7 and nuclear weapons.

Twenty samples each of five soil types, each from a major region of China, were analysed by Libs or FTIR-ATR alone. Each worked well for some soil types, but not all. Combining Libs and FTIR-ATR data, along with PCA outputs, enabled soil type separation. Next, researchers tackled two cases involving death-by-drowning in different regions of China.

There is a limit to what soil can reveal

In the first case, many questions surrounded the drowning victim recovered from the bottom of the Jurong River in Nanjing province. Was it an accident, suicide or homicide? In the pursuit of answers, soil samples from the victim’s shoes, the riverbank and the river bottom were processed via Libs and FTIR-ATR analysis. Results indicated soil from the victim’s sole is likely from the bottom of the river, rather than the riverbank. This could mean the victim entered the water from above it, rather than by walking into the river from the bank. This could point to the victim being pushed into the river – but does not rule out that the victim jumped. There is a limit to what soil can reveal.

In the second case evaluated using Libs and FTIR-ATR analysis, investigators had a family tragedy on their hands. The bodies of two children, aged six and three, were recovered from the Beihe River near a village within Jiangsu province. The children’s stepmother was shoeless at the scene and ‘claimed that she was trying to save the two children’. Her shoes were found in the river and soil samples were collected from each, along with soil samples from areas adjacent to each victims’ body, as well as soil on the bottom of both shallow and deep areas of the river.

Researchers interpreted their results to indicate the stepmother’s shoes were exposed to soil at the bottom of the river and adjacent to the childrens’ bodies. ‘Even if she had taken her shoes off to save the two children, her shoes would not have contacted the soil next to the children’s bodies,’ wrote the researchers. This could suggest the stepmother stood in the immediate area where the children drowned, pointing to the possibility of intentional drowning.

Each unsolved homicide is a person lost who leaves behind loved ones that have so many questions. Soil analysis can provide a path to answers as to who, what, where and how. Even if it can’t tell us why.