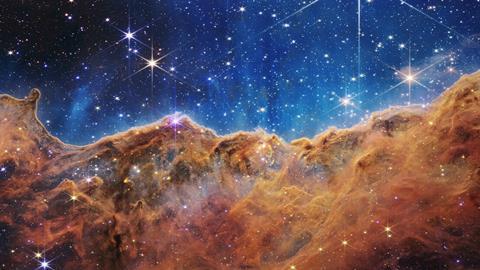 There were cheers among space scientists when the James Webb Space Telescope (JWST) launched in December last year. There is now elation as the first images have started coming through – and they truly are breath-taking. But this isn’t just a triumph that benefits astronomers, the multi-billion dollar telescope should be a boon to chemists too.

But the JWST has had a long and tortuous road to the stars. Ideas for a new telescope that would eventually replace the Hubble Space Telescope were being bounced around in the 1980s with the first serious designs produced at the end of the 1990s. At the inception of the project, the telescope was expected to launch in 2007. Fourteen years later the cheers must have been accompanied by sighs of relief as the telescope sped to a remote point in space beyond the Earth on an Esa rocket.

To go with the spiralling costs and frequent delays that exasperated politicians and planners alike, even the name of the telescope proved controversial. Former Nasa administrator James Webb has faced accusations that he was complicit in the persecution of gay and lesbian scientists working at Nasa in the 1960s. Following the claims, Nasa investigated but found no evidence that it said warranted changing the telescope’s name. With all these problems you might be forgiven for thinking that the project was conceived under an ill-fated star.

Nevertheless, the trials and tribulations that have plagued the JWST are now taking a backseat to the new images. Part of the reason that the JWST can deliver such wonderful images is its suite of infrared cameras. While Hubble works with visible light Webb carries out its imaging and spectroscopies across the mid- and near-infrared regions – a range no other space telescope comprehensively covers. This provides Webb with unprecedented insight into what makes up the universe’s stars, planets and other celestial bodies and allows it to peer farther back in time than any telescope yet.

This focus on near- and mid-infrared radiation is great for looking at distant stars and galaxies that are red-shifted and invisible to Hubble. But this is also great for astrochemists – something that was less of a consideration when it was being designed. After all, the first exoplanet was only confirmed in 1992. Compounds like water, ammonia and many small organics absorb infrared radiation in the near to mid ranges. This means that the absence of specific wavelengths of light from a celestial body can then be used to infer the presence of these chemicals. Consequently, the chemical composition of exoplanets can be examined in detail previously impossible. The same goes for galaxies. Even the chemical composition of the matter swirling around black holes is up for investigation. More amazingly still, this data is present among the first snapshots from the probe.

The Webb telescope might have begun life as the brainchild of Nasa, but the interdisciplinary nature of big science has meant that the European and Canadian space agencies have joined too. Increasingly, the big questions in science are being tackled by massive collaborative projects like Iter, the human genome project and the Large Hadron Collider. Such projects are so complex and costly that it’s now becoming difficult for a single nation to fund them.

One of the biggest questions that Webb might answer is: are we alone? Its ability to observe the chemicals present in a planet’s atmosphere offers the possibility of establishing whether there is life – intelligent or otherwise – on other planets. The Webb telescope is a marvel of scientific cooperation that offers astrochemists new insight into the largest chemistry experiment in existence. Webb can hold up a six-and-a-half metre mirror to the universe and, just maybe, to our place in it.