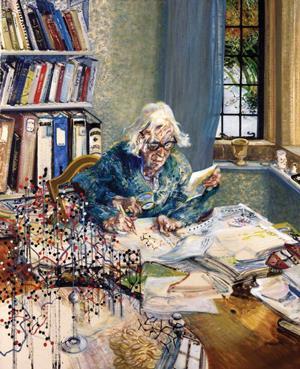 A new portrait of Dorothy Hodgkin painted by Maggie Hambling is now hanging in the National Portrait Gallery. Commissioned by the trustees of the gallery this year, the picture currently replaces the portrait of the prime minister; like Margaret Thatcher, Hodgkin read chemistry at Somerville College, Oxford. Her main research work was on the x-ray analysis of large molecules. In 1964, she won the Nobel prize for chemistry for work on the structure of vitamin B12. Although officially retired, Hodgkin is still actively involved in research – as the portrait shows.

Ed. This portrait, painted in Hodgkin’s study at home in Warwickshire, features the three dimensional structure of insulin in the foreground. Hodgkin, the first British woman to be awarded a Nobel prize, is getting on with her work and nothing is going to interrupt her – she isn’t even looking at the artist!  Hodgkin is painted with four arthritic hands, apparently reflecting her ability to do many things at once, although it was suggested by one of her family that actually the multiple hands reflected the artist’s frustration that the sitter would not keep still!