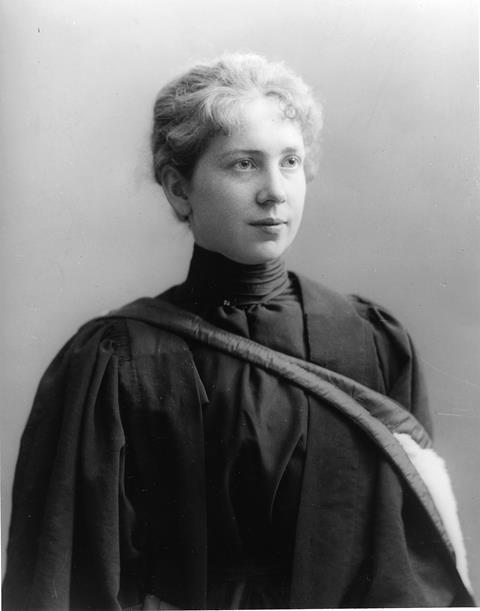 It all began with a cameo portrait of a young woman in the book Discovery of the Elements by Mary Elvira Weeks. The young woman was Harriet Brooks. Her research work with Ernest Rutherford, and later J J Thompson and Marie Curie, had long been forgotten. We wondered why Weeks had included the image of this young woman in among all the portraits of aged males. As we traced Brooks’ life through her publications and correspondence, it became clear there was a story which needed telling.

We wrote it. And it was rejected – justifiably so. We had written the book as natural scientists: what she did; where she went; excerpts from her letters; all done. It was fortunate that a reviewer, the late Marianne Ainley, came to our rescue, pointing out that we were doing Brooks a disservice by sharing ‘just the facts’. We needed to contextualise and delve deeply into our subject and her life, to describe the challenges facing a young Victorian woman trying to follow her dream of scientific research in an exclusively male world; we had to re-invent ourselves as amateur social scientists. This we did, producing a richer and more flowing account of her life and work.

One of our sources of context was Rutherford’s voluminous surviving correspondence at the University of Cambridge archives. We found that he had corresponded with other early women in the field of radioactivity. This follow-up research resulted in the book, A Devotion to Their Science: Pioneer Women of Radioactivity.

Having revealed so many forgotten women in the field of radioactivity, we received a request from the American Chemical Society (ACS) to research and co-author an overview of women in chemistry throughout history. During our research, we ‘discovered’ a disproportionately large number of British chemists. We felt only a small proportion could be included in an ACS book.

Why were there so many? This phenomenon we traced back to networks of private girls’ schools which prided themselves in excelling in chemistry. Thus for several years, we spent much of our time in dusty girls’ school archives reading their century-old school magazines for mentions of chemistry – of which there were many. We were often asked ‘What are you looking for?’ to which our response was: ‘we have no idea, but we will let you know when we find it!’ This massive research project culminated in the book, A Chemical Passion: The Forgotten Saga of Chemistry at British Independent Girls’ Schools, 1820–1940. And so progressed our discovery of what has seemed an endless number of forgotten British female chemists.

We are periodically asked how one starts researching the life and contribution of a forgotten chemist. We wish we had an answer! There is no generic pathway. One route was to find female members of the Institute of Chemistry or other chemical-related societies, and search Chemical Abstracts for any publications under their names. Another was to scan the publications list in obituaries of male chemists, hoping that, as was often the case, female coauthors were identified by ‘Miss’ or by a complete first name.

We never had the time or opportunity to research in depth a high proportion of the female chemists we identified. Few left personal archival information. Very few gained fame. However, every one of the peripherally-mentioned women deserve to have their contributions researched and published. These were often the individuals who did the research for which their supervisor or mentor received the fame. Yet they themselves, no matter how gifted, could never advance in their careers.

Curse of the individual biography

We have come to realise that individual biographies of women chemists usually suffer from a shortcoming. By focusing upon one individual, it is easy to overlook the usually rich interactions among female scientists. Many friendships and professional relationships – such as that between Polly Porter and Dorothy Hodgkin – lasted a professional lifetime. We consider that these linkages are far more important as a support mechanism among women than among men. There is a richness to the collective activities of female chemists, such as the group-signing of petitions for admission to the Chemical Society, that cannot be captured by researching only one individual. For our most recent book we discovered that several women, collectively, with different personalities and attributes, enabled the London School of Medicine for Women to thrive in its early years. The absence of any one of them would have doomed the venture.

There is still so much to do to expand further the rich history of women (and their allies) in chemistry. It is thrilling work, just as a discovery at the lab bench. To discover a forgotten individual, or a link between women chemists, provides a lot of excitement – which must be supressed until exiting the silent environment of the archives!