All that glitters is not harmless 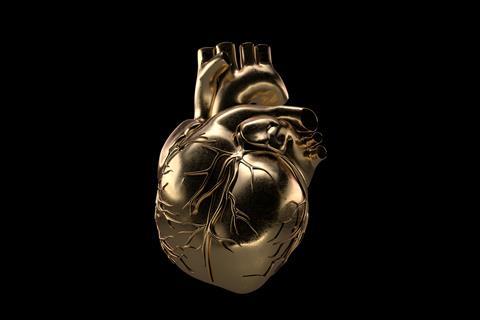 Bulk gold isn’t toxic, but encasing your heart in it is not medically recommended

Saying a loved one has a ‘heart of gold’ is high praise. A compliment of Shakespearean origins, ‘heart of gold’ signifies the person is kind and honourable. Similarly, deeming someone as good as gold means they are genuine, reliable and well-behaved. Trade the gold in both idioms for arsenic, lead or thallium, and praise becomes poison. The toxicity of these other semi-metals and metals is so well known that ‘heart of lead’ or ‘as good as arsenic’ would be widely recognised as grievous insults. For those persons held close to our hearts, gold-themed descriptions bestow the glittering qualities of the metal to the individual and relationship – splendour, stability and safety.

Bulk gold is considered safe because it is one of the least reactive metals. (Nano gold is weird.1 The fate and toxicity of gold nanoparticles are still challenging questions to answer.) Gold metal is impervious to various forms of chemical corruption that would consume lesser metals, earning its noble metal moniker and making it ideal for currency. For its shine and statement of status, pure gold has adorned weaponry throughout history – for style, rather than substance. Metallic gold, for all its superior qualities, is too soft for heavy combat.2,3

Death by gold has made a splash in fiction, but many fans know this is just flashy mayhem. Consider the death of Viserys Targaryen in HBO’s Game of Thrones. Viserys pushed his sister Daenerys and her husband Khal Drogo too far, even petulantly demanding a crown. Drogo happily – and brutally – gave Viserys a crown by pouring molten gold (which has a temperature of 1064°C or more) upon his head. Viserys’ death was gilded, but many melted metals would have given the same gruesome outcome.

Far less gory, but just as dramatic, was the demise of ‘Bond girl’ Jill Masterson in Goldfinger. Painted head to toe in gold, Masterson allegedly died due to ‘skin suffocation’ – a cause of death as ludicrous as Bond’s double entendres. Bulk gold is considered so safe it’s been used as a dental prosthetic and restorative for over 4000 years.4,5 People even eat pure gold with no ill effects – like the world’s most expensive hamburger that was wrapped in gold leaf, or similarly adorned sparkling sushi and doughnuts. But just as ‘all that glitters is not gold’, not all gold is harmless. Bulk gold is considered a safe bet,6 but all bets are off with gold salts.

The pharmacology and toxicology of gold(i) compounds is markedly different from metallic gold.5 This can be a boon or bane. Select gold(i) salts were literally the gold standard of treatment for rheumatoid arthritis,7–9 with their therapeutic activity likely due to several mechanisms. Chrysotherapy, so named because gold is called chrysos in Greek, must be carefully managed. The toxicity of medicinally used gold salts follows along the lines of classic heavy metal poisoning, including the hallmark symptoms of abdominal pain, nausea and vomiting. Gold salts affect a number of bodily systems and sites including skin, mucosa, kidney, blood, bone marrow, lung, nervous system and the liver. Deaths are rare, though they have been documented in the literature for several decades.8–10 None appear to be the result of someone poisoning the patient. To find a documented case of criminal chrysotherapy, I had to take a dramatic turn.

In an episode of the American medical TV drama House, an apparently happily married couple are treated by Dr House and his team, the husband suffering from an array of ailments. The wife’s displays of devotion turn out to be masking discontent. House proves – through the use of the stannous chloride colour test for gold11 – that the wife has been poisoning her spouse. She is literally caught purple handed, as the test produces a pigment called purple of Cassius.12

House’s trick of coating his hands in stannous chloride test solution and clasping the wife’s is not recommended for repeating, as this solution is typically 10–20% weight per weight hydrochloric acid. House names the compound responsible to be the arthritis drug gold(i) sodium thiomalate (brand name Myochrysine), quipping that either the wife’s fingers are worth their weight in gold or she has been sprinkling the drug on her husband’s cereal.

Given the diabolical genius of this poisoning plot, you will be happy to know that getting one’s nefarious hands on gold(i) sodium thiomalate might be more difficult than prospecting for gold. Like most gold salts-based drugs, it is administered by intramuscular injection, and doses are stored at a healthcare site and administered by a healthcare professional by prescription. Perhaps most comforting to readers is that I found no real-life murderous plots featuring chrysotherapy gold salts. Let’s hope users of these compounds remain as good as gold.

3 C H Fulton, Principles of Metallurgy: An Introduction to the Metallurgy of the Metals. McGraw-Hill Book Company, 1910