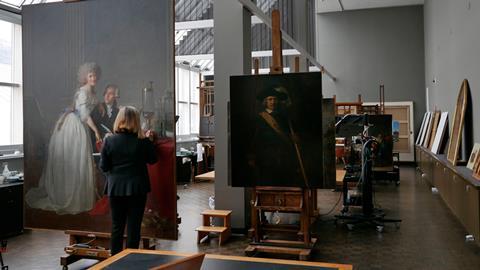 It feels as though everything you need to know about Antoine Lavoisier, prime architect of the late 18th century chemical revolution, is contained in the portrait of the French scientist painted in 1788 by Jacques-Louis David. He is both the classic Enlightenment sage, his scientific instruments gleaming on the table where he writes, and also an aristocrat surrounded by opulence, from the red velvet of the tablecloth to the sparse neoclassical elegance of the background. Most strikingly of all, he is not even the central figure of the portrait – for he sits gazing adoringly (or is it nervously?) at his wife Marie-Anne Pierrette Paulze-Lavoisier, her wig by far the more exuberant, her voluminous white dress outshining her husband’s sombre black. She looks out of the canvas with a cool, mildly amused gaze, her expression telling us who is really in charge here.

Lavoisier did owe a lot to his wife, who organised her husband’s notes and memoirs to ensure his legacy after he was guillotined in 1794. Marie-Anne worked with her husband in the lab, using the drawing skills learnt from David himself to produce sketches of his experiments. Perhaps most valuable of all was her ability to read and translate, as well as to understand and criticise, scientific works written in English. In an age when science was largely a closed book to women, she was not – as some histories have implied – merely a dutiful wife and assistant, but a collaborator.

As a portrait of a progressive couple of the Enlightenment, David’s painting tells such a compelling story that it’s positively shocking to see it upended by a new analysis by conservators and curators at New York’s Metropolitan Museum of Art, where the picture is housed, of the image’s literally hidden layers and meanings.1 Research scientist Silvia Centeno and her colleagues have used microscopic and spectroscopic techniques to investigate the pigments and techniques used by David, revealing the original composition that the artist subsequently painted over. The buried layers were first uncovered by infrared reflectography: as infrared radiation penetrates the paint surface, the reflected spectrum shows overpainted features, including the original underdrawing in what was probably charcoal. The researchers then looked more closely with macro x-ray fluorescence, which reveals maps of specific elements such as lead (mostly as lead white), mercury (in vermilion), iron and calcium.

What a different tale they tell! The technical instruments were not there at all in the first draft, suggesting that Antoine was originally depicted not jotting down his scientific findings, but perhaps instead attending to his business as a tax collector for Louis XVI – the activity that saw him condemned by the Revolutionaries as a wealthy stooge of the monarchy who allegedly enriched himself through fraud. Equally shocking is what sits on Marie-Anne’s head – not merely the bountiful wig of the final piece but a huge, ribboned black and red hat festooned with flowers in a style fashionable in late 1787, characteristic of the conspicuous consumption among the ruling classes. In other words, this was not a portrait of rationalistic progressives at all, but of the sort of privileged socialites who came to be seen as the enemies of the people during the Revolution. David also seems to have painted out shelves of books originally behind the sitters – were they also incriminating in some way?

Discretion is the better part of valour

Centeno and colleagues think the changes were made by David in 1787–88, presumably to rescue the image of his sitters as France tipped towards revolution. What we’ll probably never know is whether this was done through the discretion of the artist or at the request of the Lavoisiers as they saw which way the wind was blowing. It’s a testament to David’s skill that no sign of the changes remained on the paint surface – often such revisions and overpainting can be detected simply by careful examination, for example revealed by the shadows of raised areas due to thicker paint when the surface is illuminated with light at a very shallow (‘raking’) angle. David was renowned for his technical virtuosity, which here he put to good use by selecting pigments that would totally cover and obscure the strongly coloured hat even with a very thin coating.

David was no stranger to self-preserving reinvention during those turbulent times. Having been a celebrated portraitist during the monarchy, he quickly switched his allegiance to Robespierre and the Revolution and enjoyed great influence over the arts during the Republic. Yet when it was succeeded by Napoleon Bonaparte’s coup d’état, David courted favour with the new ruler too: his dramatic painting of the self-styled emperor astride a rearing horse is probably his best-known work.

Antoine himself was not so adept, of course, but his wife survived the Terror. She was briefly imprisoned after Antoine’s execution, but survived bankruptcy to recover her husband’s confiscated books, edit his notes and get them published. Eventually she left for England, where she met and married the intrepid adventurer and physicist Benjamin Thompson, Count Rumford, who cofounded the Royal Institution in London in 1799. The marriage was unhappy, and Marie-Anne soon returned to France, dying in Paris in 1836 at the age of 78 – and retaining, even then, the name of her illustrious first husband.