What’s revolutionary about the Chemical Revolution?

How an event in chemistry shaped philosophy 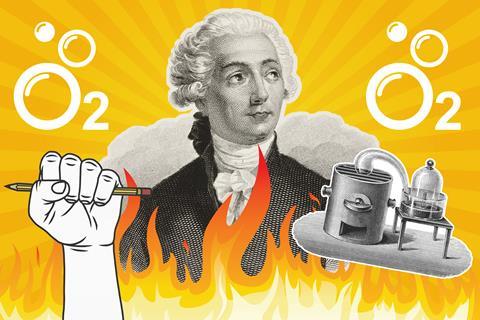 In the 1770s, Antoine Lavoisier proposed a theory that would result in such an extraordinary change to chemistry that it would later be referred to as the Chemical Revolution. His theory of combustion not only brought forward the discovery of a new element – oxygen – but it also signified the end of what was previously regarded as the standard understanding of combustion and of chemical phenomena more broadly; namely the end of phlogiston theories.

To many philosophers, the Chemical Revolution brings to mind the broader notion of scientific revolutions. In large part, this is because the Chemical Revolution features in one of the most influential and popular philosophical books of the past century; namely Thomas Kuhn’s The Structure of Scientific Revolutions. In this book, Kuhn proposes a quite insightful and (at the time of its publication) highly original account of how science undergoes changes and alters our understanding of the world.

Kuhn popularised the terms incommensurability, normal science, scientific revolution, and perhaps the most famous one of all, paradigm shift. According to his account, prior to Lavoisier’s oxygen theory, there was a period of ‘normal science’ during which chemists took phlogiston theories to form part of their world view. At that time, chemists occupied themselves with determining unspecified chemical facts, such as studying the properties of gases or measuring the weight of materials before and after they burned. However, it became increasingly difficult to explain the resulting experimental measurements by the presence of phlogiston during such processes, thus leading chemistry to a crisis. This triggered a debate among chemists who proposed different candidate theories to accommodate these anomalies. Lavoisier’s theory of combustion was ultimately preferred as it explained in a simpler and more straightforward manner these new experimental results.

What is perhaps most interesting in Kuhn’s proposal is his claim that science progresses in a discontinuous manner. The shift from phlogiston theories to the oxygen theory involved a change in chemists’ world views, but also in the language and concepts, questions, projects and research goals they pursued after they had accepted Lavoisier’s proposal. These changes were so significant that a comparison between past and present chemical theory is in a sense impossible – hence the so-called incommensurability.

This is what constitutes the occurrence of a paradigm shift and is what Kuhn claims happened with the Chemical Revolution. Of course, there are many more interesting features to Kuhn’s account and – as often happens in philosophy – a lot of subsequent work questions whether Kuhn was right about how the Chemical Revolution unfolded.1 In any case, Kuhn’s work has been extremely influential to philosophical thought and the study of the Chemical Revolution plays a very important role in evaluating not only his work but how science evolves in general.

Realism, progress and the structure of scientific theories

However, the Chemical Revolution did not only impact philosophy’s understanding of changes in science. This event also resulted in questions about the reality of chemical entities, scientific progress and the structure of scientific theories, among other things.

For example, the Chemical Revolution exemplified a major philosophical worry about scientific realism. How was it possible that during the reign of phlogiston theories, chemists managed to make good use of chemistry and even produce accurate empirical results (at least to an extent)? Given that – as it turns out – phlogiston does not exist, this is quite worrying. It suggests that even with our best current theories, empirical success is not a guarantee that the scientific entities we posit actually exist. This is known as the pessimistic induction argument (Chemistry World, November 2020, p71).

For example, the Chemical Revolution exemplified a major philosophical worry about scientific realism. How was it possible that during the reign of phlogiston theories, chemists managed to make good use of chemistry and even produce accurate empirical results (at least to an extent)? Given that – as it turns out – phlogiston does not exist, this is quite worrying.2 It suggests that even with our best current theories, empirical success is not a guarantee that the scientific entities we posit actually exist. As I’ve previously discussed, this is known as the pessimistic induction argument.

So, the Chemical Revolution is a very important case study in the investigation of various philosophical questions. Its role in the history of science is unique and stands out relevant to other episodes in science. While small changes happen relatively frequently in science, it is not often that a change involves such a radical revision of how the world is. This is ultimately why historians and philosophers of science are still so interested in this event, even though it’s been quite a long time since chemists entertained the idea that phlogiston makes things burn!

2 An intriguing philosophical account that argues in favour of the existence of phlogiston can be found in: H Chang, 2016, ’Scientific realism and chemistry’, in Essays in the philosophy of chemistry, eds E Scerri and G Fisher, 2016, Oxford University Press