How do you keep reactions cold in the plant?

It’s probably one of the first tasks you ever set about in the laboratory: making a 50% sodium hydroxide solution. It’s terribly simple – to a clamped-down Erlenmeyer flask containing water, you add your sodium hydroxide and start stirring. As the sodium hydroxide dissolves, the heat released can be intense enough that you need to cool it. If you’re making a litre or two of this solution, you’ll need a tub full of ice to absorb the exotherm.

What happens when you need to cool more than a couple of litres? Depending on where you work, it’s not really that different. In my past life as a kilo-scale laboratory chemist, the flasks themselves were outlandishly large – but so was the tub that goes underneath. Many, many trips to the ice machine are required to fill that tub, which could serve as a bath for a couple of children. The coordination of it all can get tricky. Clamping down the flask is crucial: as the ice melts, the flask begins to float if there isn’t sufficient reactants, reagents and solvent acting as ballast. I ran many a Grignard reaction initiation or Swern oxidation in these absurdly large glass flasks, with the main difference being the mechanical overhead stirrer replacing a magnetic stirring plate.

The reactor temperature passed 5°C and kept rising. The voice of the operator calling out the temperature got louder and higher pitched

Need to be colder than 0°C? Not an issue – even in big plastic tubs, the combination of dry ice (in fist-sized rocks now) and acetone is an effective means of getting to lower temperatures.

It’s plant scale that offers a challenge to cooling and temperature control. As reactors get larger, the surface area to volume ratio reduces drastically, and the mass of solvent and heat-generating reagents becomes sufficient to ignore the cooled surface it is surrounded by, no matter how cold it is. 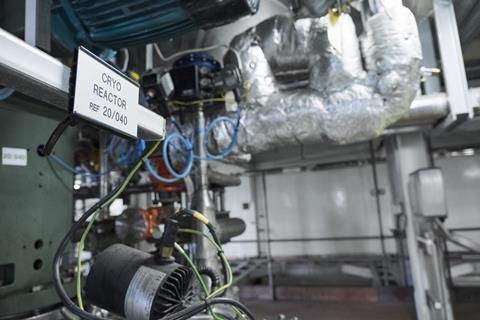 I once was charged with scaling up synthesis of a particularly toxic material that had the propensity to polymerise. Determining the best way to condense the two reactants at a temperature warm enough to have it proceed quickly, but cool enough to avoid the risk of polymerisation was a major goal of my laboratory work. To teach me the dangers of the classic ‘all in and heat’ approach, my superiors had me charge both reactants and the catalyst to the flask and watch the very impressive exotherm on 25ml scale.

As the temperature of the flask rocketed from a lukewarm 28°C to over 120°C in less than a minute, I quickly decided that this was not the best approach for process development! I was pleased to learn that charging one reactant to the flask, adding the condensation catalyst, cooling it to below 5°C and then slowly adding the second reagent portionwise was sufficient to keep the temperature well below the point at which the product would be tempted to polymerise.

Once we had the laboratory process in hand, it was time to head to the plant. There, we don’t have big tubs of ice. Rather, we have jacketed reactors connected to a propylene glycol refrigeration unit. These glycol-cooled jackets can get reaction mixtures to around –10°C given enough time. There are lots of different ways to control the jacket temperature, but the easiest is a simple valve that controls how quickly the cold glycol solution flows around the reactor.

During the first pilot reaction at 30kg scale, I was very tense. Even though our reactors and cooling systems have predictable capabilities, it was still a pilot reaction. On adding the second small portion of reagent, the reactor temperature began rising quickly. It passed 5°C and kept rising. The voice of the operator calling out the temperature got louder and higher pitched. We called for the glycol valve to be fully opened, and we finally heard the temperature peak at a seemingly high 12°C. I admit to my knees actually wobbling as we all took a deep breath and watched the temperature drift back down to 0°C. Amusingly, that temperature increase (and self-heating) never happened again, even on 4000 litre scale. Chemistry is unpredictable sometimes.

Of course, there are much colder temperatures to be reached. Want to get to the truly cryogenic temperatures required for lithium-halogen exchange in larger-scaled equipment? Just add liquid nitrogen directly to the reactor until the reaction mixture reaches the desired temperature. Of course, you’ll have to worry about venting the nitrogen gas, and potentially overcooling and freezing your reaction mixture solid. But it’s a simple solution to a difficult problem; one that does not require installing expensive cryogenic equipment or resorting to submerging your reactor a really big tub of liquid nitrogen!