How to resist science threats

Broader forms of activism are needed to protect evidence-based policy

‘What do we want? Evidence-based science. When do we want it? After peer review.’ This droll placard was one of the best at the Stand Up for Science rally in Boston, US, in February, a gathering that drew a modest crowd of hundreds. We can expect a lot more one-liners when thousands join the March for Science in Washington DC on 22 April, an event that will be mirrored by hundreds of satellite marches around the world. 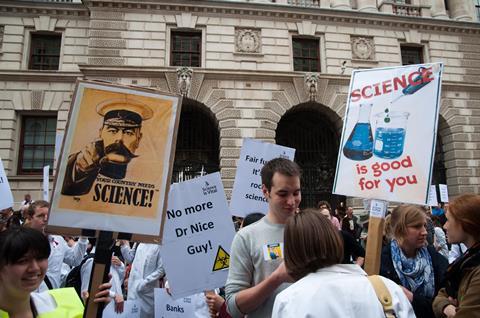 Protest is in the air, and Donald Trump’s presidency is giving scientists plenty to protest about. His administration increasingly seems to prefer ideology over evidence: witness Scott Pruitt, the new head of the Environmental Protection Agency (EPA), claiming that carbon dioxide is not a primary contributor to global warming. This feeds into a growing sense that science might be losing its privileged place as a respected arbiter of advice to government.

Meanwhile, Trump’s proposed 2018 budget would gut 31% from the EPA’s budget; slash spending at the National Institutes of Health by 18%; and reduce funding for the Department of Energy’s Office of Science by 20%. A full-throated outcry against these proposals is sure to join a cavalcade of other pro-science, anti-Trump, pro-evidence and anti-ignorance sentiments during the march. But is this event really the most effective way to communicate these messages?

There’s little doubt that such protests can have a positive effect: 2010’s Science is Vital campaign in the UK drew thousands to a rally that arguably played an important part in warding off funding cuts for basic research. This movement had a clearly defined goal and it was bolstered by an array of other efforts to apply political pressure.

The March for Science is a little different. It began as an explicit backlash against Trump’s election, discomfiting some researchers who believe that science should remain resolutely apolitical. Although it’s naïve to think that science and politics should never mix, it is undeniable that the march’s partisan origins risk alienating many US voters. Meanwhile, its smorgasbord of nebulous messages will struggle to cut through to the average citizen.

I can’t offer an easy way out of this conundrum. But those organising the march need to figure it out – and fast. Trying to keep protesters at the march focused on a handful of core themes may be unrealistic, but they should certainly try to help marchers frame their messages in cannier ways. There will be many other opportunities to protest against Trump’s administration and scientists who disagree with his ideology should certainly join those efforts. But the March for Science will gain more traction by attacking the policies and not the man.

Above all, though, the march could become much more than a crude communication mechanism directed at politicians or the general public; instead it should act as a rallying cry for deeper participation by scientists in political and public life.

One of the most recent examples of that kind of activism is 314 Action, a group that gives scientists the tools they need to break into politics, at any level from a school board upwards. It offers advice about fundraising, putting a campaign team together and establishing a communications plan. Their goal is for elected scientists to bring a more evidence-based approach to decision-making and a more pro-science agenda to public life. 314 Action is affiliated with the Democratic Party, but the framing is rather different than the march: these are political activists first and foremost, who happen to have a background in science.

There are plenty of other ways for scientists to get their voices heard. The US National Academy of Science has a communication project called From research to reward that aims to demonstrate how basic science can lead to societal benefits, using examples ranging from tackling acid rain to matching kidney donors with patients. It provides scientists and science organisations with a media toolkit that includes pre-prepared tweets, Facebook posts, videos and articles to share.

Outreach in schools is also vital, especially at a time when state legislators across the US are considering bills that would water down teaching on hot-button topics like climate change or evolution. Scientists can also press their case with political representatives, speak up for colleagues who are affected by Trump’s ill-conceived travel ban, or join an advocacy group. In the UK, for example, Sense About Science has become an effective campaigning group for the value of evidence-based policymaking.

These are all the sorts of grassroots initiatives that can collectively make a huge difference to the perception of science in wider society and bolster the case for policy based on data rather than dogma.

For decades, US scientists have had the luxury of a political establishment that broadly endorses their worldview. Trump now seems to have shocked many scientists out of that complacency. Those jolted into action need to understand that a single march is unlikely to change the course of Trump’s administration. But if done right, it could be the spark that ignites a much wider form of activism among scientists, speaking out for the values and principles they hold dear.