Hydrogen-powered cars are not going to save the world, and the sooner we realise it the better, argues Mark Peplow

A sleek car glides past the undulating hedgerows of a country lane. The only sounds it makes are snatches of Vivaldi from the stereo, and the exhaust pipe emits nothing more noxious than water vapour. As it passes, a cloud of butterflies takes flight into the clean summer air.

Proponents of hydrogen-powered vehicles have long envisioned this as the future of motoring. But today, that dream is almost as distant as ever – and increasingly serves as a distraction in the quest to cut greenhouse gas emissions by replacing petrol. 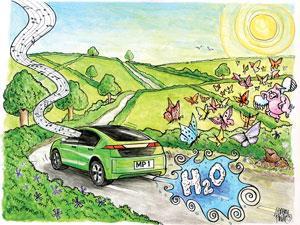 At first glance, hydrogen looks like a suitable alternative. It has a higher energy density (by mass) than petrol, and could be distributed to filling stations through pipelines. And although specially designed internal combustion engines can burn hydrogen directly, hydrogen is even more efficient when it drives a fuel cell to generate electricity.

A decade ago, governments and funding agencies drew up ambitious plans to develop cheaper fuel cells and to enable cars to store practicable quantities of hydrogen. In 2003, President George Bush committed $720 million to the research effort. But by 2009, it was clear that hydrogen was no quick fix, and US energy secretary Steven Chu diverted much of the funding into battery research. It was the right move.

When the ‘hydrogen economy’ concept was coined in the early 1970s, advocates such as electrochemist John Bockris1 expected cheap, plentiful nuclear power to produce hydrogen by electrolysing water. Using hydrogen as an energy carrier in this way made sense at the time – power-line losses made hydrogen a more efficient way to move energy over long distances, and battery technology simply wasn’t good enough propel electric vehicles much faster or further than a milk float.

But nuclear accidents, although extremely rare, have made many governments wary of investing in extra nuclear power stations. And they have also exposed the hidden costs of nuclear power: cleaning up the accidents and dealing with radioactive waste.

So, instead, more than 90% of the world’s hydrogen is produced from fossil fuels, through steam reforming of natural gas, for example, which also produces carbon dioxide. That carbon dioxide could be sequestered underground, but it isn’t, because carbon capture and storage technology is not sufficiently well developed and the costs are astronomical.

Wind or solar power could be used to drive electrolysis plants, but isn’t that clean electricity better used to feed today’s  more efficient power grids, and to charge lithium-ion batteries that far outstrip those available in the 1970s? The fuelling points for battery-powered cars are a relatively simple extension to our existing power grid, and new technology is reducing recharging times.

Hydrogen, in contrast, requires an entirely new supply infrastructure. That’s why the only hydrogen car on the road was, until recently, the Honda FCX Clarity; just a few dozen drive around southern California – the only place in the US with a sufficient network of hydrogen filling stations. In February, Hyundai launched its Tucson ix35 hydrogen fuel cell vehicle, and hopes to make 1,000 of them for the European market. Compare that with the European commission’s hydrogen roadmap, which forecasts an incredible 1 million hydrogen fuel cell vehicles by 2020.

Storing hydrogen on board a car also requires expensive pressure vessels or cryogenic systems. Chemists and engineers have worked hard to find alternatives, such as adsorbing hydrogen onto porous materials, or using hydrogen-dense molecules to release hydrogen on demand. For example, Matthias Beller at the University of Rostock, Germany, recently unveiled a ruthenium catalyst that can generate hydrogen from methanol at a relatively mild 65–95°C.

But while the ruthenium catalyst is a lovely bit of chemistry, it is not a breakthrough for the hydrogen economy: the reaction releases carbon dioxide, which is much harder to capture from millions of cars than it is at a single power station; the catalyst turnover frequency reached 4700h–1, many orders of magnitude from practicability; and it relies on ruthenium, global stocks of which are thought to be only about 5,000 tonnes.

In February, the UKH2Mobility partnership issued a report suggesting that 1.5 million hydrogen-powered vehicles could be on the road in the UK by 2030. Yet even this optimistic report noted that the effort would only reduce carbon dioxide emissions by about 3 million tonnes – less than the world currently emits in one hour.

Hydrogen will undoubtedly find transport niches, but talk of hydrogen powering a substantial proportion of the planet’s billion cars (and counting) is driven more by techno-optimism than evidence. Faster and more significant impacts would come from improving battery technology, investing in clean electricity sources and developing carbon sequestration. The hydrogen economy is alluring, but it is a distraction from the important task of decarbonising our transport system.