In search of solvation

The panoply of solvents available for experimentation is one of the delightful aspects of chemistry. There are so many to choose from, and each has its special applications where it outshines the rest. Ethereal solvents work beautifully with Grignard reagents and organolithiums, for example. And the azeotrope that forms between toluene and water is very useful in removing moisture and driving condensation reactions towards product. Process chemists spend much of their time picking just the right solvent to deliver quality product with an acceptable impurity profile. 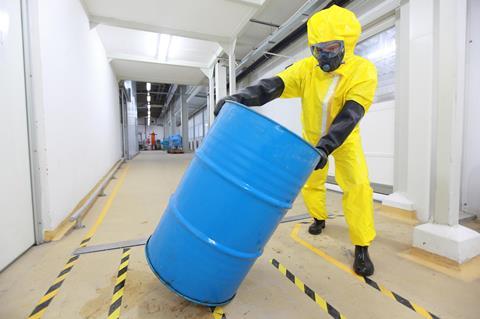 Hexanes and ethyl acetate are stalwarts of organic synthesis, especially in column chromatography. But hexanes are rarely used as reaction solvents in process chemistry, and that’s not just because we try really hard not to do chromatography on scale. One rarely mentioned aspect of solvents that must be considered in the plant is the possibility of static discharge. Hexanes and other non-conducting alkane solvents are prone to building up static charges, especially in a reactor with a moving agitator. Alkane solvents can even produce very small ‘pinholes’ in glass reactor linings due to discharges, pitting the walls of reactors and creating tiny leaks that ultimately have to be repaired.

Rather than the soft subtlety of ethyl acetate’s pear-like odour, isopropyl acetate smells strongly of cherries. As well as its delightful smell, I love its properties as a process solvent. The extra carbon makes it a touch less polar than its sibling. Instead of waiting for the ever-so-slow ethyl acetate–water interface to show up in the separatory funnel or reactor sight-glass, the boundary between the two layers is usually crystal clear. Ethyl acetate is reasonably miscible in water (1.8% w/w) and as such, it can hydrolyse, releasing ethanol to react further with your products. Isopropyl acetate is much less prone to hydrolysis.

One very common solvent with unique, practically bizarre properties is dichloromethane. Its two chlorines and single carbon atom give it remarkable solubility and unusual density. This density can pose problems on laboratory scale, making shaking a separatory funnel with four litres of the stuff (weighing 5.3kg) quite the exhausting exercise routine.

Imagine, then, the effort required to move a 200 litre drum. When I worked in a kilo-scale laboratory, lifting the 350kg drums required a special trolley and throwing my weight all the way back just to lift the behemoth into the air. I was always terrified that one of the drums would come crashing down and send me flying into the air like Wile E. Coyote. That’s something they don’t train you for in graduate school. Four drums of dichloromethane on a pallet weigh something close to a small car. You feel every single kilo as you carefully navigate the drums into the storeroom with a pallet jack. You definitely want to make sure fingers and toes are nowhere near the pallet as it would crush anything underneath it.

Why work with dichloromethane, then? Its solvation power is unparalleled – it’s hard to think of an organic compound that it won’t dissolve. Extractions from an aqueous layer are also very simple; charge the DCM, agitate it, drain it from the bottom valve – simple!

It has a remarkably low boiling point as well, making product recovery pretty rapid. You can watch the solvent come roaring out of the rotary evaporator flask, past the cooled condenser and into the collection flask. But if you leave for just one moment, it can boil out of the entire rotary evaporator. Our kilo laboratory (perhaps unwisely) had plastic ventilation piping connected to the rotovaps. After a week of distilling, the pipes began to droop: the dichloromethane vapours had begun to condense in the ventilation piping – testament to its powers of dissolution.

There is one final aspect of solvent selection that process chemists have to consider: after the solvents have been experimented with, selected, processed and distilled off, they must be disposed of. Solvents like hexanes and isopropyl acetate burn quite readily, so waste can be inexpensively incinerated. Getting rid of dichloromethane is altogether another problem – its resistance to combustion means it cannot be burned without additional energy expenditure, and is therefore much more costly. It’s one more reason to avoid it in the plant – and another reason to go back to the bench and search that perfect alternative solvent.