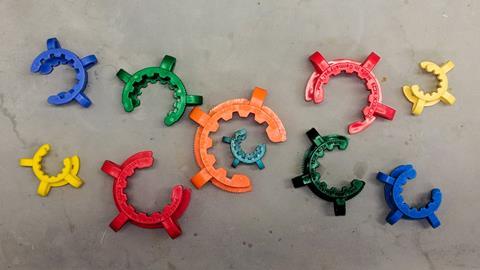 Why won’t the polyether used to make Keck clips dissolve in water when a very similar polyether, polyethylene glycol (PEG), will? German and Dutch researchers think they have solved this little mystery, but the answer is far more than just a chemical curiosity and could actually help scientists better understand and predict a molecule’s solubility.

PEG dissolves extremely well in water and is widely used in shaving cream and skin care products, for instance. Meanwhile polyoxymethylene (POM) is completely insoluble and is a plastic used in everyday objects, including Keck clips that chemists use in labs the world over to connect glassware.

These solubilities, however, are counterintuitive. On paper, the chemical structure of POM means it should dissolve at least as well as, if not better, than PEG. That’s because per gram of polymer, it has almost twice as many oxygen atoms, which should make the polymer more hydrophilic. These predictions of solubility are based on the fact that oxygen atoms are partially negatively charged making them hydrophilic – a prerequisite for solubility. Yet POM is totally insoluble.

Previous work suggested that the different distances between oxygen atoms in the polymer chains could explain the discrepancy because the oxygen–oxygen distances in PEG fit better into water’s hydrogen bond network. Now Sander Woutersen and colleagues at the University of Amsterdam and institutions in Germany have a new explanation.

The team made the discovery by first conducting water dynamics experiments and quantum chemistry calculations on oligomer solutions of PEG and POM. These revealed that water around PEG-like polyethers is rotationally immobilised, but not so in POM. This difference only fuelled the mystery. But turning to computer simulations led by Bernd Ensing, also at the University of Amsterdam, the researchers found that this was explained by the partial oxygen charge being much lower in POM than in PEG.

To see if this the partial charge could determine the solubility difference the team simulated ‘fictitious’ POM molecules that had the same partial oxygen charges as PEG. ‘As soon as we changed the charge from POM-like to PEG-like these “POM-with-PEG-charge” molecules immediately dissolved,’ says Woutersen.

‘It’s a very exciting piece of fundamental work that provides a much deeper understanding on the interactions of ether groups with individual water molecules,’ comments Remzi Becer, who develops smart polymers at the University of Warwick, UK. ‘This understanding will allow us to design polymer structures with a precisely controlled solubility behaviour that could be used in temperature-controlled release of bioactive compounds such as anti-cancer drugs.’