Solvation caught in the act 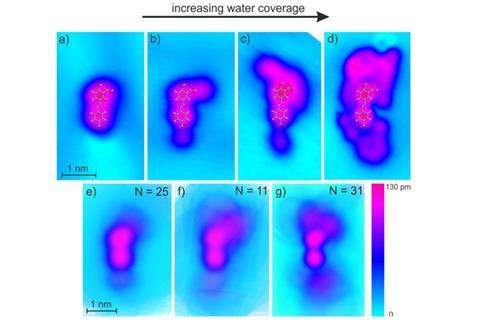 The growth of the solvation shell of heavy water around an organic dye was captured under a scanning tunnelling microscope. On the left the dye starts free of water and subsequent snapshots captured the gradual addition of water molecules over time

Scientists have caught snapshots of water molecules as they build a solvation shell around a single organic molecule.

Solvents can influence a solute’s colour, they govern how chemical reactions play out and dictate the way proteins chains fold. Nevertheless, how solute and solvent interact remains poorly understood and is difficult to capture on a molecular level.

Karina Morgenstern and her team from the Ruhr University Bochum in Germany have now managed to catch glimpses of how the dye 5-(4-nitrophenylazo)salicylic acid forms its solvation shell in a series of scanning tunnelling microscopy images.

The researchers found that the first water molecules stick to the carboxylic acid and the nitro group. As the solvation network grows, it first does so around these two groups. Only at this point does the hydroxyl group become involved as its intermolecular hydrogen bond to the carboxylic acid oxygen prevents it from forming its own hydration shell earlier. When the water/azo dye ratio reaches 70:1 the whole molecule gets enveloped in a hydration shell.

To capture the process, the azo dye was immobilised on an inert gold surface and heavy water was used for better microscopy contrast. The assembly was then cooled down to around 27K (–246°C). Although these conditions are extreme, and might not fully reflect what’s happening in room temperature water, the results give researchers a basis for understanding how solvation shells forms around a molecule’s hydrophilic and hydrophobic parts. Morgenstern’s team thinks their method of capturing the growing hydration shell could also be applied to other molecules and solvents.