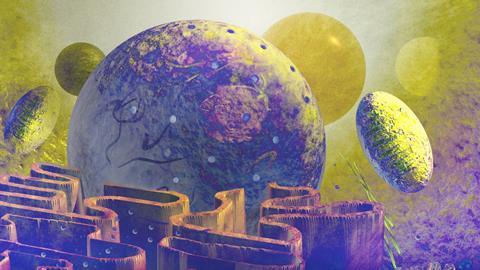 Is life the sum of its chemical parts?

Unravelling the mysteries of our cells

‘Life is just chemistry anyway’ is the typical response to yet another chemistry Nobel prize being awarded to people working within the life sciences. One could reasonably place two of this year’s laureates, George Smith and Gregory Winter, in that category: Smith developed the technique of phage display while working on problems in genetics, and Winter used it to find pharmaceutically valuable antibodies using viruses.

This might make chemists feel a little better about the central status of their discipline, but it’s a risky strategy. On the one hand, the trajectory of cell biology in the 20th century could be told as a steady retreat from simplistic descriptions of the cell as a ‘bag of enzymes’. No one quite believed that this was all there was to it, but from the time Eduard Buchner ground up yeast to extract the enzyme-laden ‘juice’ in the 1890s until around the 1960s, much of cell biology relied on destructive methods such as centrifugation to extract the contents and separate them into fractions like so much crude oil. ‘Is our method of fractionation like the clumsy undertaking of a car mechanic who attempts to use his crude tools to analyze a watch?’ worried biochemist Efraim Racker in 1965.1

The meaning of life

On the other hand, some biologists fear that chemistry, in the form of molecular biology, has become so installed at the heart of their subject now that genome sequencing and protein crystallography are routine, cheap and fast, that the living entity itself has been lost in the process. Microbiologist Franklin Harold says that ‘Something is not accounted for very clearly in the single-minded dissection to the molecular level… Between the thriving catalogue of molecules and genes, and the growing cells under my microscope, there yawns a gulf that will not be automatically bridged when the missing facts have all been supplied.’2 Another eminent microbiologist, Carl Woese, wrote in 2004 that ‘the molecular cup is now empty. The time has come to replace the purely reductionist “eyes-down” molecular perspective with a new and genuinely holistic “eyes-up” view of the living world.’3 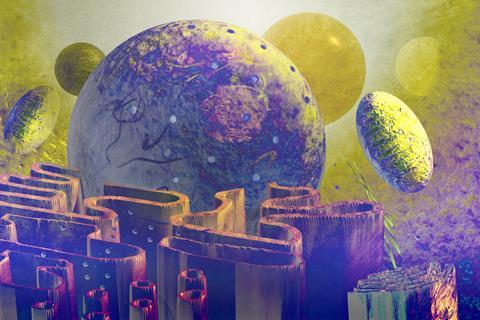 Life is more than just a ‘bag of enzymes’

The problem is partly that there seems to be no level of magnification at which all that is important can be discerned. Go to the molecules and you lose life itself. Zoom out to the cell or organism and you are overwhelmed by the complexity and unable to find mechanism. But there is also this: interventions that might seem clumsy, crude or minor may turn out to have transformative consequences for a cell.

It was a surprise, for example, when in 2006 Shinya Yamanaka and Kazutoshi Takahashi showed that just four molecules (all protein transcription factors) are enough to persuade a mature adult cell to revert to the early stage of development in which it is a pluripotent stem cell, able to turn into any tissue type.4 What’s more, researchers at Peking University have since shown that a cocktail of small synthetic molecules can do the job too.5

Against this dramatic revision of what cells were thought to be capable of, it seemed less of a stretch when stem-cell pioneer Yoshiki Sasai claimed in 2014 to have made differentiated somatic cells (lymphocytes) revert to a pluripotent state by nothing more than exposure to chemical stress – specifically to acidic conditions.6 The claim was, however, later found to have relied on fraudulent data. Sasai was cleared of any fraud himself, but was severely criticised in the Japanese press for mismanagement of his group and committed suicide later that year.

What is so perplexing about biology is that sometimes simple or broad-brush perturbations can make all the difference, while on other occasions what look likely to be catastrophic interventions are ignored. Mere mechanical tensions on a cell membrane, for example through adhesion, can determine how it differentiates; but genes seemingly central to the cell’s wellbeing can be knocked out with no apparent effect.

The ‘bag of enzymes’ was eclipsed by a popular conception of the cell as a ‘chemical factory’, and it remains common to see cells spoken of as protein communities of orchestrated, coordinated molecular interaction, choreographed by membranes and organelles under the direction of the program encoded in the genome. But that all-too-human metaphor can create misleading expectations: for example, that specific cell functions can be mapped directly onto that genetic code (usually they can’t), or that blunt tools like small molecules will have only non-specific, crude outcomes.

What this means is that we should be wary of imagining that life is indeed just the sum of its chemical parts. That’s not to say it needs any sprinkling of vitalistic fairy dust, or any new principle of physics of the kind Erwin Schrödinger forecast. Rather, it seems likely that the ‘new biology for a new century’ that Woese called for in his 2004 article will need to be able to span and integrate scales of time and space. It will also need to determine how principles of function and design translate between them. Attempts to make synthetic living cells from the molecules up7 might flounder, then, until those principles are understood. As Richard Feynman wrote: ‘What I cannot create, I do not understand.’