Is there a drug for that?

One hears a lot about the concept of ‘druggability’ in pharmaceutical research. If that concept has any meaning (and it probably does), then the implication is that there must be such a thing as ‘undruggability’. So what does that look like?

Before going any further, it’s almost a legal requirement in these discussions to note that one of the most fruitful (if not overworked) mechanistic classes of recent years, kinase inhibition, was once considered undruggable. How could you get selectivity when all of the enzymes had the same ATP-binding active site? It’s worth remembering that we now live in the world where that idea has been demolished, but also how much effort it took to knock down. If we’ve learned from experience (a hypothesis always in need of empirical support), then we should have learned not to assume such things, which should make undruggability less common than it used to be. 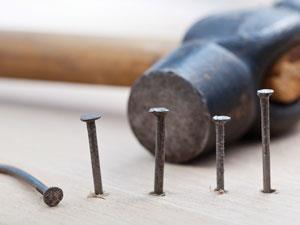 The place to find it would be, presumably, in those target classes that have had no successful drugs. But any such survey needs first to be normalised for the number of known targets in each class. There are, for example, no drugs that I’m aware of that target the interactions between polysaccharides and DNA. But I’m also unaware of many reasons that anyone (so far) might have wanted to target them. Maybe once (or if) we start screening for them, reasonable compounds will start appearing – I doubt that, but people doubted kinases, too.

When all you have is a hammer, all your problems start to look like nails

You’d also want to normalise for the number of attempts already made on a given class, but those numbers are hard to come by. The literature, though, will tell you about the extreme cases, and I would suggest phosphatase inhibition as one of these. There have been many, many papers suggesting phosphatase inhibitors as targets over the years (and there are definitely legitimate drug targets to be found there). But no molecule has ever made it through. So far, phosphatases have been undruggable.

Other mechanisms that come close to that standard are targeting transcription factors and protein–protein interactions in general. There is the occasional success or partial success, but compared to the number of attempts, and the interest in making them, these have to be considered much harder than the usual run of targets, if not outright undruggable. But this brings up a larger point: are we looking at this whole topic from the wrong direction?

The whole idea of undruggability exists in comparison to the known pharmacopoeia, which is heavy with compounds targeting biogenic amine receptors and various enzyme active sites. Maybe these are just unusually druggable, and everything else is the normal state of affairs. Medicinal chemists sometimes have the worldview that everything, given enough time and effort, should be susceptible to small molecule intervention, which brings to mind the old saying that when all you have is a hammer, all your problems start to look like nails. We size up the new targets, check our hair in the mirror, and think that the reason there aren’t synthetic molecules for these must be that they haven’t come across our own synthetic molecules yet.

But there’s no reason why this should be so. The proportion of the pharmacological world that’s responsive, even in theory, to drug-like molecules is still an open question. It’s below 100%, but how far below? The ‘low-hanging fruit’ argument has a lot of force to it, and so it should have. It’s logical to assume that the history of drug discovery, particularly as it’s informed by natural products, should have concentrated on the most likely areas to succeed. Where are the natural product protein–protein inhibitors? They’re thin on the ground compared to the natural product enzyme inhibitors and receptor ligands. Two billion years of evolution may be telling us something here.

We don’t have to roll over and accept that – the whole history of medicine is about not rolling over and accepting things like that. But we should be ready for a hard hike up what might be an asymptotic curve; one whose less strenuous parts we’ve already covered.