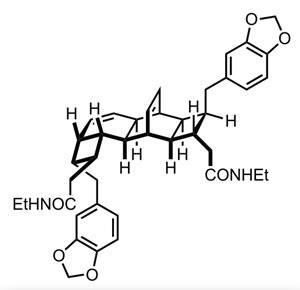 I’ve been fascinated by natural product chemistry for many years – and can vividly remember the class at Heriot–Watt University in 1999, where Peter Preston introduced me to the concepts of retrosynthesis and total synthesis.

Even though 14 years have passed since those days of being entirely terrified by frontier molecular orbital theory, the capacity for nature to astonish me with architectural ingenuity has remained undimmed. One glance at the kingianin family of natural products did this again – the remarkable and unusual cyclobutane functionality kindling thoughts of ‘how the hell..?’

Of course, I’m not the only chemist to think these thoughts, and thankfully many others have suggested very reasonable biosynthetic processes to account for the kingianins’ existence. One likely proposal is dimerisation of a somewhat less complex bicyclo[4.2.0]octadiene system via a Diels–Alder [4+2] cycloaddition (figure 1), but this still leaves the 6,4-fused cyclobutane problem unanswered.1

Perhaps the most compelling hypothesis for the biosynthesis of these systems is provided by David Black, who has suggested a domino electrocyclic reaction path from acyclic tetraenes via cyclooctatrienes.2 Attempts to confirm this part of the hypothesis have been successful, but the later [4+2] dimerisation has been stubborn in the extreme, resisting all attempts to form kingianin A – until now.

Stepping forward with a bold but reasonable alternative is a team led by Michael Sherburn of the Australian National University, Canberra.3 However, they firstly needed to build the exotic bicyclo[4.2.0]octadiene precursor – and for this, they trusted Black.

With the acyclic tetraene intermediate in mind, the team work towards a conjugated tetrayne analogue. The advantage of this route over building the tetraene system directly (through sp2–sp2 couplings) was speed and reaction efficiency – indeed, synthesis of the diyne precursors required only two and three steps respectively. Directly coupling the trimethylsilyl-protected diyne fragments was also quick, but somewhat less efficient. The suboptimal yield from this reaction can perhaps be attributed to the lack of differentiation between the partners, and consequent competing homo-dimerisation reactions.

However, completing such a complex intermediate in four steps is reward enough, as this allows the team to progress quickly to a tricky stereoselective reduction (figure 2). Using a highly activated form of zinc (named after its developer, Reuben Rieke) and ethanol as a source of hydrogen, they produce the desired bicyclo[4.2.0]octadiene target, but as a mixture of diastereoisomers. The yield may be relatively low, but again the efficiency in step-count more than makes up for this.

So now it was time to test their theory – but before doing so, a quick confirmation of previous failed efforts was in order. Trying every trick in the (conventional) book to encourage a [4+2] dimerisation, the team met with failure on each occasion. However, by deploying a far more advanced knowledge of fearsome frontier molecular orbital theory than I ever achieved, the team achieved success, albeit with a rather modest yield. The key to success was an extremely exotic agent – a stable radical salt, with an amine core bearing both a formal positive charge and an unpaired electron. This rare species sufficiently alters the electronics of the Diels–Alder reaction to allow a successful and stereoselective dimerisation reaction to occur (figure 3).

Not only has the team successfully completed the target in remarkably few steps, our understanding of the chemistry that underpins nature’s remarkable architectures has advanced.