Your article, ’The Trouble with Antibiotics’ (Chemistry World, March 2008, p16) was unremarkable in containing nothing new, but it did omit a few aspects.

The timeline failed to show dihydrofolate reductase (DHFR) or isoleucyl tRNA synthetase inhibitors, exemplified by trimethoprim and pseudomonic acid respectively. That takes the number of new classes of antibiotics approved in the period 1960 to 2000 to five - not the three quoted from Christopher Walsh’s presentation.

There is also a world of difference clinically between penicillin G, a beta-lactamase sensitive, narrow-spectrum antibiotic, and the later broad spectrum beta-lactams. In this category I include co-amoxiclav, a combination of the broad spectrum amoxicillin and potassium clavulanate, which protects amoxicillin against beta-lactamase destruction. I admit however that there is little difference in the key mode of action.

Intrinsically, the development of new antibiotics would be simplified if it was directed towards specific bacteria. New agents could be targeted to biosynthetic events and overcome cell-entry requirements specific to that bacteria. The argument against this approach is twofold. Firstly, the potential market would be reduced, compared to a corresponding broad spectrum agent. Secondly, clinicians need, in most serious cases, to prescribe a broad spectrum drug, because by the time the causative agent has been identified, the patient could have died.

Narrow spectrum agents would only be of use if identification can be accelerated significantly. As for biochemical targets, I believe not enough attention has been given to inhibitors of bacterial signal peptidases, serine proteases that remove an N-terminal sequence from pre-secretory proteins. Globomycin is a known inhibitor and some work has been with this and other agents, but none are
in development to my knowledge.

Several pictures in Chemistry World  (April 2008) attracted my attention, especially as they coincided with a letter from Peter Newsome about Philip Ball’s article on art inspired by science (Chemistry World, March 2008, p42). 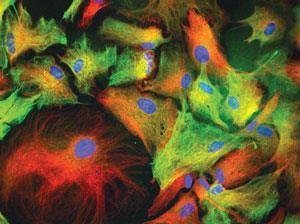 To supplement my male viewpoint, I showed the pictures on pages 43, 59, 66 and 68 of the April edition to four ladies. They all suggested that saleable fabrics could make use of such patterns, with the image on  (above) particularly artistic and attractive.

Modern architects, designers of motor cars and other items of pleasing appearance, are unwittingly turning to nature where there are few sharp corners. This instinctive appreciation of nature’s art thus surfaces in modern technology and is deeper than we realise. After all, we are all creatures of nature and are averse to ugly buildings, ugly steam locomotives and box-like motor cars. I am sure that even Prince Charles would agree.

I  read Mike Sutton’s article about Archibald Scott Couper (Chemistry World, May 2008, p44) with interest. Above the door of Couper’s house in Kirkintilloch, shown in the photograph in the article, can be seen a plaque, unveiled by Professor G G Henderson in 1931 (see below). 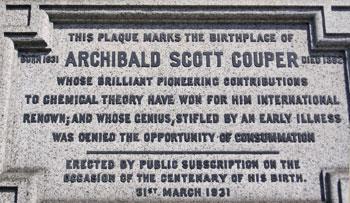 Couper and Kekul? both studied the reaction of phosphorus pentachloride with salicylic acid. English versions of Couper’s papers have been published in the Alembic Club Reprints number 21, ’On a New Chemical Theory and Researches on Salicylic Acid’.

Recent correspondence relating to the work of Gibbs (Chemistry World, April 2008, p43, and May 2008, p38) brings to mind the article by Colin Russell on the thermodynamics of Kelvin (Chemistry World, December 2007, p60).

To become really suitable for chemical applications, thermodynamics had to move to a form very different from that used by Kelvin. He never really accepted Clausius’ entropy as a quantity of central importance. Thus, when chemical equilibrium was investigated by Kelvinesque second law methods, notably by van’t Hoff, very peculiar arguments resulted. Some of us will recall McGlashan’s expression ’impossible experiments on imaginary substances’.

Clausius provided the raw material for a more suitable form of thermodynamics, while the actual construction was primarily the work of Gibbs. This involved a decided change in emphasis, to a system of argument in which - as his editors put it - ’the properties of bodies are to be studied, rather than the work they do or the heat they give out’. In other words, what was needed involved emphasising quantities like U, S, H, A and G, and de-emphasising various sorts of w and q.

Where reversible electrochemical cells were concerned, Kelvin (and Helmholtz) gave a calculation equivalent to equating -zFE to

H. Corrected treatments were given subsequently by Helmholtz and by Gibbs.

Where Kelvin perhaps deserves even more credit than Russell’s article gave him is in relation to thermocouples. Often wrongly said to be non-rigorous, Kelvin’s analysis was in fact a correct deduction from the basis on which he stated that he was working - a combination of the second law with an explicitly stated additional postulate.

By virtue of this formulation, Kelvin deserves to be regarded as one of the main founders not only of ordinary thermodynamics, but also of irreversible thermodynamics. His status in this respect is not affected by the fact that his additional postulate has been found less useful than different postulates due to Onsager and Prigogine.

The report entitled ’Sulfide sponge could clean up nuclear waste’ (Chemistry World, April 2008, p32) contains the surprisingly inaccurate statement that sodium, calcium and strontium cations are ’of similar charge and size’. It then goes on to suggest that existing nuclear waste treatments are not effective in distinguishing between these ’different metals’.

In 1984, British Nuclear Fuels announced the development of their Site Ion Exchange Plant (SIXEP) to treat radioactive water from their fuel storage ponds (M Howden and J Pilot, Ion Exchange Technology, D Naden, M Streat (Eds), Ellis Horwood, Chichester, 1984, p66). This made use of clinoptilolite - a natural zeolite - to selectively remove both caesium and strontium radioisotopes prior to discharge into the Irish Sea. The choice of the zeolite was based on an evaluation of many different ion exchangers by scientists of the then Industrial Chemistry Group at the Atomic Energy Research Establishment in Harwell. SIXEP continues to function and has been used successfully to treat other aqueous nuclear waste streams.

There are several successful plants based on other inorganic cation exchangers, for example in Finland and the USA. To be of value, novel materials such as the layered metal sulfide reported must be able to compete with existing inorganic cation exchangers - particularly their stability in intensive radiation fields, compatibility with column use and existing waste encapsulation routes. These are just some of the ’many other factors’ referred to by Abraham Clearfield, who knows as much as anybody about dealing with ’real nuclear waste’.