My colleagues and I on the committee of the South Africa North local section of the RSC enjoyed the excellent article highlighting some of the challenges facing us in South Africa, particularly when it comes to developing the chemical sciences (Chemistry World, June 2009, p46).

We were, however, extremely disappointed that the local section of the RSC, and indeed the South African Chemical Institute (with whom we have close connections and an excellent working relationship) were not approached - as the professional chemistry bodies in South Africa - for our input.

I think one area which we would both have highlighted, which wasn’t covered well in the article, is the state of chemistry teaching (and science in general) in schools. This is an area which is of grave concern to us hence our efforts to support the Sci-Bono centre and the chemistry bus (both of which were mentioned briefly in the article). However, what we are able to achieve is but a drop in the ocean compared to what is really required in most South African schools.

Many science students don’t even have access to the basics, such as textbooks, let alone the opportunity to see any practical chemistry being demonstrated. Unless the problem of primary and secondary education is urgently addressed in South Africa, any attempts at bolstering the tertiary education sector will be futile.

I think the RSC visitors whom we have entertained over the past couple of years are well aware of the challenges we face in the areas of primary and secondary education hence the wonderful support we are currently getting from the RSC to assist us in trying to make a small difference.
I Bratt CChem FRSC
Chairman, RSC South Africa (North) section
Gauteng

I read with interest the News in Brief  item Alkali metals reveal a taste for clam  (Chemistry World, May 2009, p5). To my great surprise, the existence of supramolecular assemblies into which Rb+ or Cs+ do interact with aromatic

systems in the presence of water was claimed to be a ’chemical curiosity’ just ’discovered’ by an Australian team publishing in Angewandte Chemie International Edition, 2009, 121, 3175.

It happens that Jean-Pierre Morel and I have already evidenced the existence of such interactions in an article entitled Binding of monovalent metal cations by the p-sulfonatocalix[4]arene: experimental evidence for cation  -

interactions in water  that was published three years ago in Organic & Biomolecular Chemistry, 2006, 4, 462. 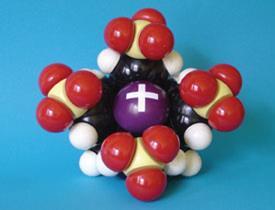 An alkali metal cation bound inside a calixarene cavity

An alkali metal cation bound inside a calixarene cavity

In this article, which doesn’t have a title as enticing as that of the Australians’ paper (no clam, no meat) and doesn’t display attractive figures, we showed that, in purely aqueous medium, alkali metal cations, and particularly Rb+ and Cs+, bind inside the calixarene cavity where they do interact with the aromatic

systems of the receptor.

Furthermore, from a close examination of the free energies of hydration and complexation our paper revealed an important outcome: the alkali metal cation with which the calixarene forms the most stable complex (Cs+) is not the one that yields the strongest interactions with the

systems but the one that is the less strongly solvated by the water molecules. That is why Jean-Pierre Morel and I feel that the words ’discovery’ and ’curiosity’ used to describe the work published in Angewandte Chemie  are somewhat improper.
N Morel-Desrosiers AMRSC
Universit? Blaise Pascal, Clermont-Ferrand, France

Much has been made recently of carbon capture and sequestration as a means of mitigating global warming (eg Chemistry World,  May 2009, p25 and June 2009, p6).

Now, we can tolerate a certain amount of oxygen depletion - a 0.1 per cent reduction would presumably not make much difference to the biosphere - but at some stage it will become a matter of significance.

No doubt someone has done the relevant calculations and reached conclusions as to how much carbon dioxide sequestration can be carried before we run into an oxygen depletion problem.

After all, no-one would pursue such an activity without doing the obvious calculations, would they? It is just that I have not seen any reference to such calculations or to the conclusions reached.
D Bailey MRSC
Bury, UK

I read the recent Undercover academic  column with equal parts amusement and concern (Chemistry World, June 2009, p38). Assuming it wasn’t completely tongue-in-cheek, I am now apparently one of those who have ’reached the dizzy heights of seniority and are no longer required to care’ about annual reviews. But as a department chairperson, I do care about both the untenured faculty members in my department, as well as those who have been tenured and promoted to associate professor, but not yet promoted to the rank of professor.

In the eight years I have been chairman, I have recognised that I am part of a small and quickly vanishing tribe - the group of people who are both leaders at a university, and who have been leaders within the military.

In my case, I was a lieutenant and captain in the US Army, way back when the Soviets were the big, bad wolf. Perhaps strangely, leadership in the service does translate well into an academic setting, at least when it comes to being organised.

As a lieutenant stationed in a war stock reserve site in Mannheim, I filed numerous officer evaluation reports, unit site and defence plans, and annual reports to some office or other, many of which eventually found their way to the US Army, Europe Command Headquarters in Heidelberg, West Germany.

All of that taught me that any annual report which was written and forgotten for a year was bound to become a problem in the future.

Now, years later, I routinely bore my more junior faculty members with such stories every time I remind them that an annual assessment report is a living document, and should be kept up and examined frequently.

Here is a quick step-by-step plan for getting beyond mere survival of an annual review, and making it work for you:

These five steps are no guarantee of tenure or promotion. They are however a guarantee that writing an annual review will not become an annual form of torture. They also turn the review into a roadmap or guideline that really does aid a person’s professional development, however na?ve that sounds.

Our undercover academic and all his or her kindred spirits can definitely turn an annual review to their advantage.
M A Benvenuto
Department of Chemistry & Biochemistry
University of Detroit Mercy, US

I am delighted to hear of the success of Graham Richards and the other Oxford chemistry lecturers who have been congratulating themselves on the multi-million pound businesses that they have started up over the past 20 years (Chemistry World, July 2009, p52). The ?64m Chemistry Research Laboratory on South Parks Road leaves visitors in no doubt that the fine balance between teaching and research that most higher education institutions aspire to is somewhat unbalanced at Oxford.

Richards states that when starting up a business, ’things work best if the leading academic remains in the university doing his or her normal job’. Is it not part of a university lecturer’s normal job to focus on lecturing, teaching classes, giving tutorials, marking essays and supervising? Am I alone in assuming that a good lecturer ought to be too busy teaching during term time to start up a multi-million pound business? When Richards says ’things work best’, he is clearly talking from a financial point of view about himself and not from an educational point of view about his undergraduates. One thing is for sure; research still comes first and teaching second at Oxford. And let’s be honest, if you’re starting up a multi-million pound business, teaching probably comes third.
A Hardwicke MRSC

This helpful letter enables me to emphasise what I said in the article and to refute the allegation about teaching being neglected. In all the Oxford cases cited, none of the academics concerned had any reduction in teaching, examining or research duties. All continued their normal activities. I myself never missed a tutorial. How is this possible?

The answer is that a crucial aspect of starting a spin-out company is the hiring of the CEO who undertakes most of the work, including the all-important presentations to funders. He or she may be rewarded with equity in the company. The academic provides ideas and may act as a non-executive director or perhaps chair the scientific advisory committee, but not as an employee. The ’pupil contact hours’ of Oxford tutors are in fact rather higher than in other universities.

The Biofuel future? completely ignored the Brazilian experience (Chemistry World, April 2009, p40), which is very surprising to say the least. Its ethanol programme, implemented over 30 years ago, has been a reference to all other countries’ planning biofuel policies and has reached a nationwide distribution system which involves fuelling a huge proportion of light vehicles. 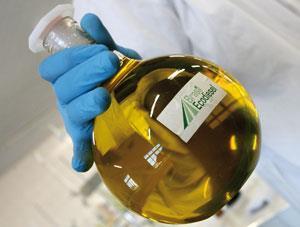 Biodiesel from oleaginous plants (castor, soy and sunflower) or animal fat is big business in Brazil

Biodiesel from oleaginous plants (castor, soy and sunflower) or animal fat is big business in Brazil

To this state of affairs, which refers to a unique achievement since no other country has reached this level of practical implementation, it is equally important to add that Brazil is conducting a very important scientific and technological programme aimed at future biofuels (eg second-generation bioethanol from cellulosics) through the construction of different types of biorefineries. I personally witnessed this last month while visiting various public and private institutions devoted to the exploitation of renewable resources.

The omission was therefore quite unfortunate because it distorted an otherwise interesting essay.
A Gandini CChem FRSC
University of Aveiro, Portugal

I could not believe my eyes when I saw the article Dow Corning unleashes innovation  (Chemistry World, July 2009, p18). It was utterly crass and insensitive to print such an unbalanced article in a magazine whose principal readership is composed of UK-based chemists, some of whom are directly affected by the actions of this company.

I can only assume that you were unaware but in April of this year Dow Corning closed its entire UK R&D operation, which had been based in Barry (near Cardiff): 50+ positions wiped out, almost all chemists, from technicians to PhDs. The sales office near Coventry is also in the process of being closed, leaving just a manufacturing plant in Barry.
Anon
Barry, UK

The 800 job cuts announced by Dow Corning in February are a sad reflection of the difficult times we live in, and my sympathies go out to all affected. The company is not alone in having to take such drastic action - we covered nearly 35,000 job losses from the industry in the January and February issues alone. The article was merely trying to highlight how the company is shifting its sales to the web to combat the slump in demand caused by the recession.