Make or break: the laws of motion

Calling chemistry ‘molecular architecture’ is even more apt than it might seem. There was a time when architectural engineering was largely about getting buildings to stay up: to withstand the stresses and forces that act on them. But today’s architecture is responsive, mutable, adaptive and dynamic. Likewise, chemistry could appear in its first flush to be about making bonds that will last, but today’s chemistry is just as concerned with breaking as it is with making. The dynamic role of weak hydrogen bonding, for example, was illustrated with the discovery of DNA’s structure: to template replication and transcription, the molecule must form unions of a finely tuned strength, sufficient to overcome thermal fluctuations but weak enough to anneal flaws and to prevent life crystallising into death. 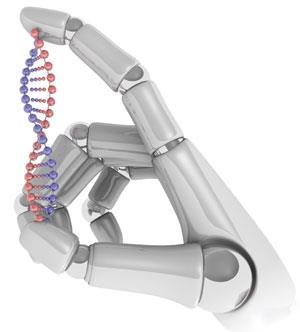 The machine metaphors of nanochemistry and molecular biology now make it plain that dynamic function arises from the use of weak, temporary interactions – hydrogen bonding, hydrophobic interactions, screened ionic forces – between relatively strongly linked but flexible scaffolds. This is a more challenging engineering problem than is often recognised; it’s akin to the problem of a robot grasping an egg. And while we tend to think of bonds as either ‘holding’ or ‘breaking’, like an adhesive joint or a masonry beam, in fact there is no well-defined rupture stress: in 1978, biophysicist George Bell argued that loading a chemical bond simply increases its unbinding rate in exponential proportion to the load applied.1

In view of this relation, the question biology has to face is: what is the optimal bond strength for a given mechanical function? This issue is tackled by Henry Hess of Columbia University, US, in a paper that is stimulating fresh thinking about molecular machines.2 Consider a kinesin motor protein ‘walking’ along a tubulin track. The objective is to transfer impulse from the protein’s motor stroke – a conformational change driven by hydrolysis of adenosine triphospate – to the protein–tubule interface, propelling the molecule forward. Hess compares it to a car (kinesin) stuck in mud (tubulin). Anyone who has ever faced this situation knows how delicately the coupling must be managed, by engaging the clutch to just the right degree. Too much and the wheel just spins: the bond snaps. Too little, and the wheel’s coupling to the engine is insufficient to generate movement. The optimal point is found where the wheel–mud adhesion is just about to cease.

Using the response Bell described, Hess shows that as the load on a bond is increased, the transfer of impulse across the bond has a peak. The position of this peak depends on the distance to the transition state for bond rupture along the reaction coordinate. In other words, here is a design criterion for the ideal molecular machine that transfers energy during reversible binding: the bond should be just strong enough to be likely to survive during the power stroke. It’s much the same issue as the architect’s aim to optimise the strength of components so that they neither fail nor overcompensate and waste material – except that for chemical bonds failure is a statistical matter, contingent on fluctuations.

In biology, as in architecture, loads are often shared between many components, spaced so that the force on each does not exceed its individual capacity. That’s the case, for example, in muscle tissue, with many bonds between myosin motor proteins and their actin filament anchors. If some bonds break, they can be repaired without failure of the whole structure. But Hess reasons that nature will try to avoid the high metabolic overhead of repair, and that its structures will therefore evolve towards the point where each bond is loaded with the same optimal force as for single unions.

It’s hard to test if this is really so, not least because evolution must juggle many constraints and because mechanical forces are rarely constant or equally shared. However, Hess shows that for cardiac muscle tissue, where the various parameters of the equations (such as distance to the transition state) have been measured, the optimal force predicted in this model is roughly equal to the average force that real cardiac tissue typically experiences. Similarly, the maximal power output measured for the kinesin–tubulin couple occurs at about the value calculated to be optimal. So Hess argues that biomolecular machinery does seem to have evolved to satisfy this fundamental physical constraint. For the designers of synthetic molecular machines, the message is that not all weak bonds are alike.