Three years ago, the French Network for Theoretical Chemistry (RFCT) started looking at the gender balance of invited speakers to meetings that were applying for funding from us. We were not happy with what we found.

Of the 20 proposals we received, the percentage of women invited to speak ranged from 0% to 50% (in only two cases). Overall, of the 280 invited speakers only 24% were women. In contrast, women represent around 35% of the computational and theoretical chemistry community.1

To address the problem, on 20 April we announced that we will no longer fund conferences where all the invited speakers are men.

When confronted with gender inequality in a scientific programme, organisers will often bring out a classic list of excuses: ‘Nobody told us gender balance was mandatory for the proposal’; ‘The number of women in our community is so small that they are overwhelmed with invitations’; or ‘Our organising committee is gender-balanced, so some women did agree with the programme’. 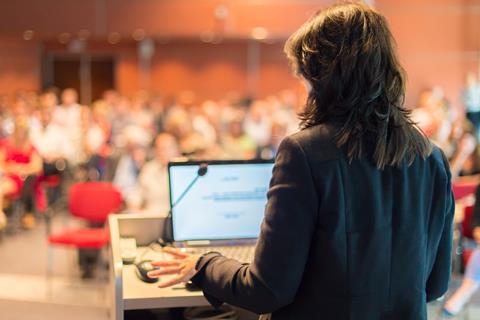 None of these excuses hold water. Since 2017, our yearly request for proposals has explicitly mentioned gender balance. This is in line with numerous other institutions across Europe, such as the European Centre for Atomic and Molecular Calculations (Cecam).

We have yet to meet a female researcher complaining about too many invitations (although it’s very thoughtful of organising committees to worry about their female colleagues…). For those who still hold that view, here’s some good news for you: if a woman is successfully managing her scientific career, no doubt she can also manage her time and refuse an invitation if necessary. In fact, she could even direct you toward another, brilliant female colleague you didn’t know about in the first place, and help swing the pendulum of gender balance back where it belongs.

And while a gender-balanced organising team is clearly a good way to promote gender equity in a scientific event,2 it might not always be sufficient. Gender inequality is a social issue that involves both men and women. When trying to set up a speakers list, we all immediately think of people we’ve already heard before. This is bound to favour male scientists – unless we decide to look for new names.

Finally, it’s important to note that people attending scientific events, especially women scientists, notice efforts put toward more equality. Over the past few years, we have repeatedly heard positive comments regarding the improvement of gender balance in meetings. Promoting equality is an important step toward organising a successful and inclusive scientific event.

Fixing gender balance is not an impossible task. Two years ago, gender equality became mandatory for setting up a jury for a defending a PhD thesis in many French universities. Scientists who are women have not been overwhelmed with requests, and creating a diverse panel takes no more thoughtful planning than it did before.

There are also ways to ease any outstanding concerns about a newcomer’s suitability. If you are afraid to put on your list someone you’ve never heard speak before, why not invite them to give a seminar in your lab first? Chances are, you’ll meet a potential collaborator and have a great scientific discussion; the worst thing that might happen is a boring afternoon at the lab – and we have all survived one of those.

The following resources are available to improve gender parity:

It’s worth noting that events funded by the RFCT are usually small meetings, focused on very specific issues, with a limited speakers list often not exceeding ten names. Invited speakers are not only French, but generally come from all over the world. When we receive a meeting proposal with only men speaking, it looks like the organisers are implying there isn’t a single woman in the whole world qualified enough to give a talk on this specific issue. If this is truly the case, then we would be very worried about the health of this scientific community.

So, from now on, if someone applies for funding from RFCT, all we ask is that at least one woman is included on list of invited speakers. It is not that much, and finding one name shouldn’t take hours. Like so many scientific communities, theoretical chemistry has to change for more equality. Change might cost you much less time and effort than you think. Give it a try.

The RFCT is funded by the National Center for Scientific Research (CNRS), France’s main public organisation for research. The RFCT’s purpose is to unite all the theoretical chemists working in French research laboratories (around 450 people distributed in 35 groups). Its next National Meeting for Theoretical Chemistry will take place in Toulouse in October 2018.