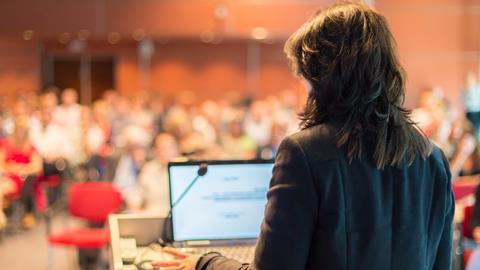 A theoretical chemistry organisation in France has said that from now on, it will not fund conferences where all the invited speakers are male.

The French Theoretical Chemistry Network (RFCT) – part of the country’s National Center for Scientific Research (CNRS) – announced the decision on Twitter on 20 April. Its director Sophie Sacquin-Mora, a theoretical chemist who works on modelling proteins, says the RFCT has been looking at ways to address the gender balance of speakers at its conferences for years.

From now on, the French Theoretical Chemistry Network will not fund scientific events with exclusively male invited speakers lists.

Three years ago, she tells Chemistry World, ‘Women represented around 25% of the invited speakers in the proposals, which was clearly not enough – the estimate of women in theoretical chemistry is more around 35%.’ She adds that as the speaker lists are usually short – with four to 10 invited guests – including even a few female researchers would be enough to achieve a gender balance that was representative of the field.

In 2017 the RFCT started explicitly mentioning the importance of gender balance among speakers in its requests for event proposals. But this didn’t seem to make a difference, and they continued to receive proposals with predominantly male or male-only speaker lists. So this year Sacquin-Mora suggested to her fellow directors that the network should no longer fund events that only featured male speakers and they agreed. Feedback from the community so far has been positive, she says.

‘Frankly I do not think the lack of female speakers in theoretical chemistry is the problem,’ she says. ‘We have hundreds of brilliant female researchers in that field. The problem is more likely to be the laziness of the organising teams […] which invite scientists they’ve already heard of first, and that’s bound to be biased toward male researchers.’

Sacquin-Mora also points out that there is an online directory listing female theoretical chemists who would make good speakers. ‘They are not that difficult to find if you start looking.’

The conversation around conference speaker diversity has come to the fore in recent years, with many researchers publicly calling out all male speaker line-ups. But because of the anecdotal nature of this, it hasn’t always been taken seriously, says Heather Ford, a geochemist at the University of Cambridge, UK.

After sitting through many male-dominated conference sessions, Ford and her colleagues decided to use data from the American Geophysical Union’s Fall meetings from 2014 to 2016 to analyse speaker opportunities.1

‘Overall, there’s clearly fewer women given speaking roles,’ Ford says, though she adds that this may be partly due to women being more highly represented among students and early-career researchers, who are asked to speak less frequently in general. ‘When you actually control for career stage – so you compare women students to men students, for example – there wasn’t that much of a difference.’

The data also showed, however, that male conveners organising a conference session pick fewer women when choosing speakers from a pool of abstracts, even when career stage is taken into account. This does point to gender bias, Ford says, and suggests that one way to address the imbalance would be encourage women to take up convening roles, as they tend to invite other women to speak. She says RFCT’s decision to only fund conferences that include female speakers is ‘certainly a strong incentive’ to bring about improvements.

‘I’ve also seen men who were invited to be part of an all-male panel refuse to present unless there is an improvement in the diversity of the panel,’ she says. ‘And they’re often very vocal about it – there’s a little bit of naming and shaming involved. I don’t know if that’s an effective way to go about improving [diversity] but it is a method I’ve seen employed.’

What is always helpful, Ford says, is for large conference organisers to make speaker data available to researchers, so that progress can be monitored. ‘If you don’t have the data to analyse it’s an easily dismissed notion, but when you’ve actually analysed the data it’s there in black and white […] that women overall aren’t given similar speaking opportunities,’ she says.

‘It’s something that the community needs to start talking about.’