There are plenty of things that small molecule drugs can’t touch, says Derek Lowe, and it’s not for want of trying

Medicinal chemists have targeted a great many sorts of therapies over the years, but the number of arrows that have hit the mark (or even come close) varies widely. The G-protein coupled receptors (GPCRs) have famously been a source for many drugs, since many of these recognise reasonable-sized molecules as their natural ligands. Kinase inhibitors have been a big success over the last 20 years, and several other enzyme classes have multiple drugs that disrupt their function. 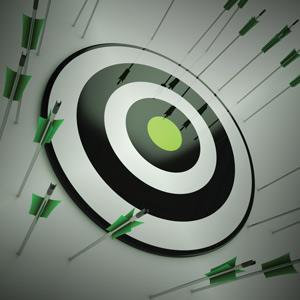 But there are enzymes that no mustard has ever cut, to steal a phrase from science fiction author James Blish. Phosphatases, the flip side of kinase activity, are a perfect example. As far as I know, there are no selective, druglike small molecule phosphatase inhibitors. This is not for lack of trying, either. There are a number of quite plausible drug targets in this area, biologically speaking, with the protein–tyrosine phosphatase 1B enzyme for diabetes and metabolic disease perhaps leading the list. We chemists, though, don’t seem to be able to make compounds that the active sites of these enzymes are interested in. The necessary phosphate recognition is probably to blame. Any pocket that binds this small, polar, charged, geometrically distinct group will scorn most of the products of a typical drug discovery team. If you try to beat this problem by mimicking the phosphate, you quickly find out that it’s much harder than it might look, and the resulting compounds often refuse to have druglike properties.

Past these, there is an entire universe of potential drug targets that don’t really involve small molecule binding pockets at all. There must be uncounted hundreds of thousands of different protein–protein interactions taking place in a living organism. But again, as far as I’m aware, none have ever been discovered that rely on a small molecule site in their binding surfaces. The best you could hope for is some sort of allosteric site that alters one protein’s conformation, and these are no small challenge, either. Pure protein–protein interactions have been targeted, and a few drugs are in the clinic, but they tend to be rather alarming compounds. Without specific, evolutionarily optimised druglike sites, the binding surfaces involved tend to be relatively large and relatively lacking in dramatic features. Compounds that disrupt them are very likely to skew towards larger and more complex parts of chemical space than most medicinal chemists have the urge to explore.

Some of these may turn out to be just untargetable, but we really don’t know that for sure yet

If you feel like delving into deeper regions of target space, consider going to the ones that have non-protein components. DNA and RNA molecules stay very busy interacting with proteins and with other members of their own tribe, but making drugs out of these processes will give you all that you can handle. There are certainly drug molecules that bind nucleic acids, but making one specific enough to disrupt a particular interaction without kicking over too many other genomic processes is a challenge that’s rarely been met. The number of cellular mechanisms involving small RNA molecules suggests that there may be many drug targets in that space as well, but drug discovery in that area is at a very early stage at best.

Tired of all this transcription and translation? Try the various carbohydrates decorating the surfaces of proteins and cellular components. They’re key elements of the immune system and other processes, but I can’t think of any small molecules that target these hard-to-model interactions. Compared to what we know about protein–polysaccharide binding mechanisms, those protein–protein interactions that looked so formidable a couple of paragraphs back are simple and well worked out. These carbohydrates can surely recognise each other, too, and that’s an even blacker box.

By this point, you might be wondering just how extensive the borders of the effective small molecule territory might be. It’s true that some of these may turn out to be just untargetable by such means. They may need large engineered biomolecules aimed at them to bring them around. But we really don’t know that yet. Chemical space is large and human efforts are small, and there’s no way to prove that any of these things are beyond our capabilities. What we can be sure about, though, is that none of them will be easy. But what worthwhile things are, anyway?