In a lecture hall at the University of Zagreb in Croatia, Nikola Bregovic finished his talk and stepped back to listen to the applause. He hadn’t solved the problem or anything – it was tricker than he’d thought – but he had approached it cleverly and carefully and was pleased to receive recognition for his efforts.

When he’d first heard about the competition he had thought it was ‘maybe a scam, because it seemed surreal that something like this might be true’. Tell any chemist that hot water can sometimes freeze faster than cold and they might feel similarly. 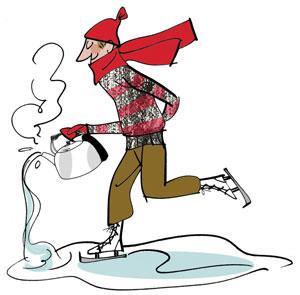 Unless they’ve heard of the Mpemba effect. A Tanzanian school student named Erasto Mpemba observed it in 1963 after mixing together milk and sugar over a stove to make ice cream. He found that the ice in his pre-heated mix formed faster than for one of his friends who, in an effort to finish first, had deliberately not heated his batch as much. Later Mpemba tried the experiment with hot and cold water and found the same result.

The effect is surprising, but it has been verified and has drawn several attempts at an explanation over the years.

When the Royal Society of Chemistry launched a competition looking for solutions in 2012, Bregovic was intrigued. Once he got going he was struck by how difficult it was to reproduce the effect. Sometimes it appeared, sometimes it didn’t. One reason for this confusion is that water can be prompted to supercool – that is, fall below 0°C without solidifying – due to tiny and hard-to-predict variables.

But Bregovic did get one particular insight: he thinks that convection currents likely play a role in driving the effect. These are stronger in warmer water and may persist as the liquid cools, leading to better heat distribution. ‘And I never observed the effect if I stirred the water,’ he says. These insights won him the competition.

Then a twist. In October 2013, researchers from Singapore posted an article to the preprint server arXiv claiming to have ‘resolved’ the problem. They suggested that in warmer water hydrogen bonds extend further, and force water molecules into more tightly knit clumps. This compresses the O–H bonds and forces them to vibrate less, they say. Because temperature is a measure of vibrations the authors suggest that decreased covalent bond vibration could be providing a net cooling effect. They back this up with some calculations.

Sounds crazy? It may well be. Despite several ‘Mpemba effect solved’–style headlines in the press, the paradox is far from put to bed. ‘In my opinion we are still at the beginning,’ says Bregovic.

Though the paper’s authors cite Bregovic’s work – and use some of his data – they don’t address the issue of convection, preferring to concentrate on the dynamics of water’s bonding. In some ways this makes sense. The Mpemba effect is only observed in water, and the compound’s interesting bonding is a unique feature. Yet it is hard to understand how the compressed O–H bonds could increase the rate of cooling. If the bonds are compressed at higher temperatures, it’s surely then that the putative endotherm occurs.

Far from solving the problem, the arXiv paper seems to add more complications. Despite this, it doesn’t make any new testable predictions – always the hallmark of a good scientific theory.

Back in the Zagreb lecture hall the applause died down and a group of academics approached Bregovic, encouraging him to continue with his research. He said that sounded good, though he might need ‘a few more resources’ if this was to be a long-term project. The next morning he found 12 bottles of mineral water waiting for him in his lab. ‘It was a good joke,’ he says.