In my opinion, any chemical lecture is greatly enhanced by an explosion. Indeed, I have given lectures in which an explosion is made by a charge that also emits a sudden bright flash of light, and have used that flash to take a photograph of the surprised faces of the audience.

Back when I was the chief physical-science consultant for Yorkshire Television, we were always trying to get explosions into that popular science programme of the time, ‘Don’t ask me’. Sadly, however, the biggest explosion I prepared for that show never happened.

I was intrigued by a story from the first world war. Apparently the large guns in central France could sometimes be heard all the way in Kent, but not in northern France or Belgium. I mused that the noise of a big explosion might not travel in a straight line, or might be reflected from the top of the atmosphere in some way. So I suggested to Yorkshire Television that we should set off a big explosion in Yorkshire.

I felt that Ilkley Moor, of the ‘bar t’at’ folk song was appropriate. Not only because of its size and location but also because I liked the idea of adding another verse. A verse where the hat (or t’at) of the title is blown off by an explosion. 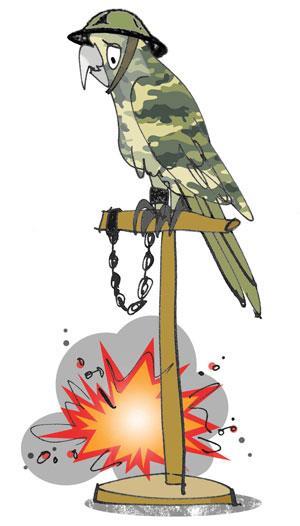 The idea was that we would point a camera at that explosion and transmit it live on TV, as part of the show. A TV signal is essentially instantaneous, whereas sound travels much slower. We would invite viewers to tell us what they heard in the real world, and when they heard it and therefore learn whether the noise of a big explosion is indeed inaudible to people at one distance, but audible to those at a greater distance.

I was particularly interested in what the explosion might sound like to different people at different locations. An explosion is a pulse of many frequencies, and some might be less diminished by travel than others. This grand experiment would give us lots of new information about sound, its speed and the way it travels through the atmosphere. The whole enterprise was part of my general notion of using an entire TV audience as a scientific sample. An early example of the phenomenon now referred to as crowdsourcing.

The Yorkshire Television science office put in a lot of work to set up the item. We chose a site on Ilkley Moor, and commissioned a tower to carry the explosive (I reckoned that about a ton of dynamite would make an adequately loud bang). Magnus Pyke, the show’s physical-science presenter, would press the plunger to set off the dynamite.

We had the whole item practically set up when Yorkshire Television cancelled everything. The company that handled our insurance wanted £20,000 to insure that item. It imagined some viewer writing in and saying, for example, ‘Since your explosion, my parrot has not said a word, and I am suing you for a million pounds!’ In the Yorkshire Television science office, we were understandably furious. At very short notice, we lashed up a silly little item for ‘Don’t ask me’, involving Pyke bursting a rubber balloon instead.

And so my big explosion never happened. I still wonder about sound and how it travels in the atmosphere. My notion is this:  if a gas molecule behaves like every other moving object in a gravitational field, it should travel in a parabola. Sound, as a movement of molecules, must do so as well. So sound should bend down slightly. It still annoys me that a brilliant experiment to test the idea, and one using a whole television audience as a scientific sample, was frustrated by the decision of an insurance company.