Implicit biases are pervasive and unavoidable. But they can be changed. 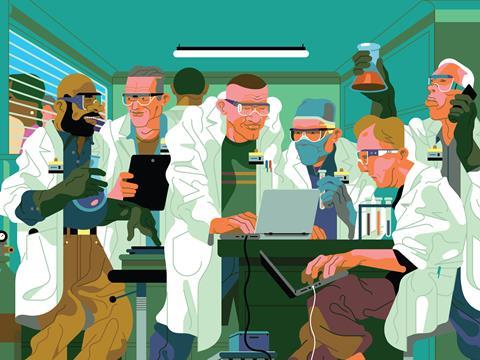 What’s wrong with this picture? I suspect it won’t take long for a reader with even the vaguest awareness of diversity to spot that this depiction of science is rather limited.

But I also suspect that for many of us, that picture will be rather familiar. I can find a similar scene quite easily – I don’t even need to leave my office. In that context, it seems perverse to find fault; it’s just reality. Why should we regard something as strange when it is the definition of normal?

The problem comes because our minds use this information to form assumptions about the world – assumptions we’re not even aware we’re making. These unconscious, or implicit, biases are constructed from our experiences, not our beliefs. There’s no escape; your own mind is constantly making a shorthand summary of the world you don’t even know about.

Consciously discriminating, mistreating or excluding groups of people requires a sustained effort – if you want to be any good as a racist or a homophobe, you have to put the work in. But unconscious biases are extremely efficient – they require almost no thought at all. It’s changing them that requires effort.

I grew up in a white family and went to a school with white friends. I saw white men doing science on TV and in films and in books (and doing pretty much everything else for that matter). Hardly surprising then if that informed my view of scientists. Did I choose chemistry because chemistry looked interesting, or because chemistry looked like me? Probably both. But the former was a conscious decision; the latter didn’t even occur to me. If the university departments I visited had been made up of black or Asian or female professors, would I have made the same decision? I certainly would have found the contrast with my assumptions jarring.

The good news is: these biases can be changed. For example, role models are often cited in discussions of diversity: we are more likely to feel included by groups when they contain people with whom we can identify – when we can see ourselves. Equally, role models of under-represented groups also help to change unconscious biases by providing counter examples that can challenge an automatic assumption.

As we discuss in our feature, it’s a tricky business and not without controversy. Methods that try to measure these biases, such as the implicit association tests (IATs) used in our feature, are just an indicator, not a certainty. Nevertheless, they are a good starting point. For our feature, the Chemistry World team took a selection of IATs that assess biases in sexuality, race and gendered assumptions about science. You can see some of the results in the article. The exercise prompted lots of discussion, and also revealed the openness that’s needed to make these conversations constructive.

No one is to blame for the circumstances of their childhood, or for the demographics of their classroom or workplace; if you have an implicit bias, it’s simply because you’re human. Yet that doesn’t mean we’re not responsible for them. We make our own decisions about how the world should look and we can choose whether to do something about it.

Normality is a metastable state. With some energy, it can be changed.