If we don’t embrace the vision of a sustainable future, who will bear the climate costs?

We have a monthly meeting in which we thrash out our ideas for graphics to illustrate the features and the front cover – Adam always describes it as the work highlight of the month. For the December issue, we had to focus on the climate crisis and the global efforts to combat it at Cop26 in Glasgow last month. Having discarded several ideas that varied on a theme of the Earth (in various styles, and placed in test tubes, petri dishes, hands etc), we came upon the idea you can see on the front and back of the magazine – and below. Our ideas were expertly turned into reality by freelance artist Doug John Miller. 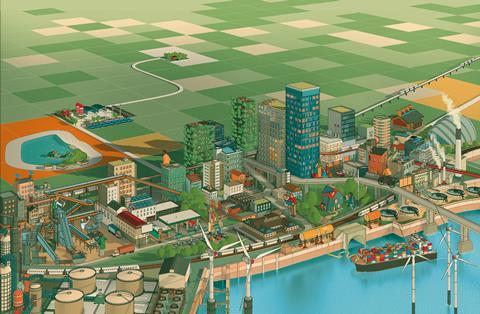 The wrap-around cover image for our December issue

Hopefully, you can see that it’s a world of solutions, not just problems. Most of them are not particularly far-fetched or in the realms of science fictions. Wind and solar power are now competitively priced compared to their fossil-fuelled alternatives. I see electric cars almost every day. Public transport and bikes have existed for many years, I am led to believe.

That’s the point we were trying to get across: the solutions to many of our climate concerns are there, they just need to be embraced, either politically or individually. And as we’ve seen from the Covid-19 pandemic, it’s a lot easier to make the right personal choice when society and the law point you in the right direction. Let’s hope that the outcomes of Cop26 commit those who lead society and make laws to lead us in towards a more sustainable future.

The Royal Society of Chemistry sent several staff to Glasgow to try to motivate and inform attendees and the public about how chemistry can offer solutions to various climate problems. But as RSC president Tom Welton says, ‘At the RSC we do a lot of telling other organisations what they should do – you can’t do that unless you are prepared to walk the walk yourself.’ That’s why I was particularly interested in commissioning the feature in which Welton is quoted, with Rachel Brazil looking at what the RSC is doing to ‘walk the walk’ on climate and sustainability.

The RSC’s goal is be a net-zero carbon-emission organisation by 2040, and to achieve at least half of those reductions by the end of this decade. Some of these activities will lead to some increased costs, but not all (not taking a trans-Atlantic flight, to pick an obvious example, costs less than taking it). In any case, as chief executive Helen Pain points out, there’s also a cost to not going carbon neutral. And while that cost may not be immediate or even borne by us, it could be too much for anyone to pay.